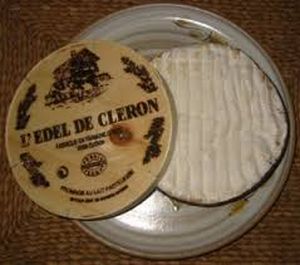 Produced by Fromagerie Jean Perrin, L’Édel de Cléron is a a soft ripened cheese made from pasteurized cow’s milk and encircled with a strip of spruce bark. The cheese is named after the town of Cléron, located in Franche-Comte region of the Jura mountains in south-eastern France. This is also the town where Jean Perrin and his wife Madeleine, both of whom were brought up in the area and come from cheesemaking families, established their own business in 1965.

The business is still very much family owned and operated with Jean and Madeleine’s children, Jean-Marie and Jean-Luc Perrin managing the company today. L’Édel de Cléron takes its inspiration from another Jura cheese with traditional origins, Vacherin Mont D’Or. While L’Édel de Cléron is made from pasteurized milk and is therefore relatively mild in flavor, Vacherin is made with raw milk. However, the two cheeses bear several similarities in terms of each having a yielding texture – Vacherin can beome positively molten with age - and the fact that they are both encircled with spruce bark which lends a definite woodsy, pine-like aroma to the cheeses.

Milk for production of L’Édel de Cléron is sourced from Montbeliard cows on the plateaux of the Jura mountains. The cows are fed exclusively on grass and fodder produced on the farm where they live. The farms all operate sustainably with emphasis on animal health and well being, and the dairies collaborate closely with Perrin to produce milk of the highest cheesemaking quality. This relationship provides economic stability for the farmers, with milk prices that are both consistent and higher than the national average – all of which helps to compensate for the added costs associated with producing higher quality milk and difficult climatic conditions.

During production, the curd is cut into approximately 1 inch square cubes and gently hand-ladled into forms, where the curd is allowed to drain under its own weigh with no pressing. This allows for the preservation of moisture, a critical factor in determining the texture of the matured cheese. After draining, the young cheeses are unmolded and a strip of spruce bark is placed around the circumference. This tradition is very particular to the Jura mountains and has been taking place for centuries. The collection of spruce bark takes place during the summer months when it is taken from felled trees in long strips, each one measuring about one inch wide.

It is then stored until needed, at which point the strips are boiled to sterlize and soften them before being cut into the appropriate length for the cheese. As well as adding flavor to the cheese, the addition of spruce bark also helps to hold the cheese together as it becomes softer with age.

During the cheeses’ two week maturation, the rind will become covered in a soft, bloomy white mold, helping to break down and soften the texture. Simultaneously, flavors from the spruce bark permeate the cheese giving it aromas of wood with distinct notes of mushrooms and earth. Flavors are extremely rich, tasting of cream with echoes of truffle.