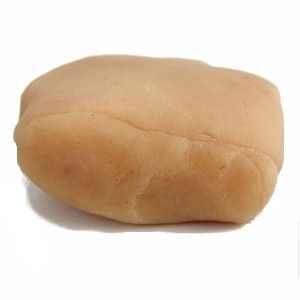 A paste made by cooking sweet and bitter almonds which have been ground and blanched in combination with sugar.It consists approximately of two parts almond to one part sugar. It is used in pastries and cakes.

In the Netherlands, almond paste is used in gevulde speculaas (stuffed brown-spiced biscuit) and banket. It is used as filling in the fruited Christmas bread Kerststol, traditionally eaten at Christmas breakfast. In Germany, almond paste is also used in pastries and sweets. In the German language, almond paste is known as Mazipanrohmasse and sold for example as Lübecker Edelmarzipan, i.e. "high quality marzipan from Lübeck".

Almond paste is the main ingredient of French traditional calisson candy in Aix-en-Provence. It is used as a filling in almond croissants.

In Turkey, almond paste is traditionally made in Edirne, once the capital of Ottoman Empire. During the Ottoman era of Turkish history, it was a royal delight mostly used in palace. It is now sold at delight shops in Istanbul and Edirne.

Health Benefits:
1. Almond paste is a highly nutritious, effective health-building food both for the body and mind and a valuable food remedy for common ailments.

3. A glass of hot milk with almond paste can help you recover from a sore throat.