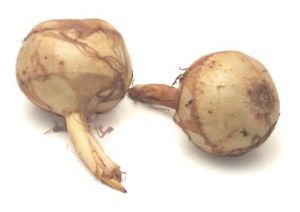 Arrowroot is a starch obtained from the rhizomes (rootstock) of several tropical plants, traditionally Maranta arundinacea, but also Florida arrowroot from Zamia pumila, and tapioca from cassava, which is often labelled as arrowroot.

Arrowroot tubers contain about 23% starch. They are first washed, and then cleaned of the paper-like scale. The scales must be carefully removed before extracting the starch because they impart a disagreeable flavour. After removing the scale, the roots are washed again, drained and finally reduced to a pulp by beating them in mortars or subjecting them to the action of a wheel rasp. The milky liquid thus obtained is passed through a coarse cloth or hair sieve and the pure starch, which is insoluble, is allowed to settle at the bottom. The wet starch is dried in the sun or in a drying house. The result is a powder, the "arrowroot" of commerce, that is quickly packed for market in air-tight cans, packages or cases.

Arrowroot starch has in the past been quite extensively adulterated with potato starch and other similar substances. Pure arrowroot, like other pure starches, is a light, white powder (the mass feeling firm to the finger and crackling like newly fallen snow when rubbed or pressed), odourless when dry, but emitting a faint, peculiar odour when mixed with boiling water, and swelling on cooking into a perfect jelly, which can be used to make a food that is very smooth in consistency unlike adulterated articles, mixed with potato flour and other starches of lower value, which contain larger particles.

Arrowroot used to be very popular in the Victorian era, and Napoleon supposedly said the reason for the British love of arrowroot was to support the commerce of their colonies. It can be consumed in the form of biscuits, puddings, jellies, cakes, hot sauces, and also with beef tea, milk or veal broth. Kudzu arrowroot is used in noodles in Korean and Vietnamese cuisine.

In the Victorian era it was used, boiled with a little flavouring added, as an easily digestible food for children and people with dietary restrictions. With today's greater understanding of its limited nutritional properties, it is no longer used in this way. In Burma, arrowroot tubers, which are called artarlut, are boiled or steamed and eaten with salt and oil.

Arrowroot makes clear, shimmering fruit gels and prevents ice crystals from forming in homemade ice cream. It can also be used as a thickener for acidic foods, such as Asian sweet and sour sauce. It is used in cooking to produce a clear, thickened sauce, such as a fruit sauce. It will not make the sauce go cloudy, like cornstarch, flour or other starchy thickening agents would.

The lack of gluten in arrowroot flour makes it useful as a replacement for wheat flour in some baking uses. Like other pure starches, however, arrowroot is almost pure carbohydrates and devoid of protein, thus it does not provide a complete substitute for wheat flour for bread-making, which requires gluten.

Arrowroot thickens at a lower temperature than flour or cornstarch, is not weakened by acidic ingredients, has a more neutral taste, and is not affected by freezing. It doesn't mix well with dairy, forming a slimy mixture. It is recommended that arrowroot be mixed with a cool liquid before adding to a hot fluid. The mixture should be heated only until the mixture thickens and removed immediately to prevent the mixture from thinning. Overheating tends to break down arrowroot's thickening property. Two teaspoons of arrowroot can be substituted for one tablespoon of cornstarch, or one teaspoon of arrowroot for one tablespoon of wheat flour.