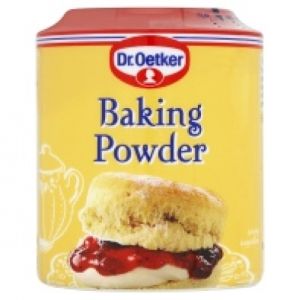 The inert material keeps the reactive components physically separated and minimizes premature reaction. It should yield not less than 12% of available carbon dioxide.
Baking powder is a dry chemical leavening agent, a mixture of a weak alkali and a weak acid, and is used for increasing the volume and lightening the texture of baked goods. Baking powder works by releasing carbon dioxide gas into a batter or dough through an acid-base reaction, causing bubbles in the wet mixture to expand and thus leavening the mixture. It is used instead of yeast for end-products where fermentation flavors would be undesirable or where the batter lacks the elastic structure to hold gas bubbles for more than a few minutes. Because carbon dioxide is released at a faster rate through the acid-base reaction than through fermentation, breads made by chemical leavening are called quick breads.

The inert starch serves several functions in baking powder. Primarily it is used to absorb moisture, and thus prolong shelf life by keeping the powder's alkaline and acidic components dry so as not to react with each other prematurely. A dry powder also flows and mixes more easily. Finally, the added bulk allows for more accurate measurements.

The acid in a baking powder can be either fast-acting or slow-acting. Baking powders that contain both fast- and slow-acting acids are double acting; those that contain only one acid are single acting. By providing a second rise in the oven, double-acting baking powders increase the reliability of baked goods by rendering the time elapsed between mixing and baking less critical, and this is the type most widely available to consumers today.

Uses in cooking:
A raising agent used in cakes, biscuits and breads. Commercial baking powder contains bicarbonate of soda and tartaric acid (with a dried starch or flour to absorb any moisture during storage). When these chemicals become moist and warm they react and give off carbon dioxide, which causes foods to rise.