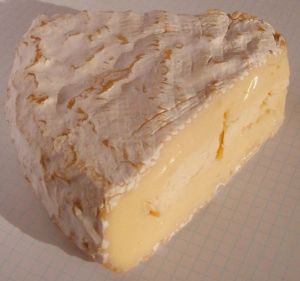 Brie is a soft cow's milk cheese named after Brie, the French region from which it originated. It is pale in color with a slight grayish tinge under a rind of white mold. The whitish moldy rind is typically eaten, its flavor depending largely upon the ingredients used and its manufacturing environment.

Brie may be produced from whole or semi-skimmed milk. The curd is obtained by adding rennet to raw milk and heating it to a maximum temperature of 37 °C. The cheese is then cast into molds, sometimes with a traditional perforated ladle called a pelle à brie. The 20 cm (8 in) mold is filled with several thin layers of cheese and drained for approximately 18 hours. The cheese is then taken out of the molds, salted, inoculated with cheese mold (Penicillium candidum, Penicillium camemberti) or Brevibacterium linens, and aged in a cellar for at least four to five weeks.

If left to mature for longer, typically several months to a year, the cheese becomes stronger in flavor and taste, the pâte drier and darker, and the rind also darker and crumbly, and it is called Brie Noir (French for "black brie"). Around the Île-de-France where brie is made, people enjoy soaking this in café au lait and eating it for breakfast.[1]Overripe brie contains an unpleasant excessive amount of ammonia, produced by the same microorganisms required for ripening.
A 30 g serving of brie contains 101 calories and 8.4 grams of fat, of which 5.2 grams are saturated fat. Brie is a good source of protein; a serving of brie can provide 5 to 6 grams of protein. Brie contains a good amount of both vitamin B12 and vitamin B2.

There are now many varieties of brie made all over the world, including plain brie, herbed varieties, double and triple brie and versions of brie made with other types of milk. Indeed, although brie is a French cheese, it is possible to obtain Somerset and Wisconsin brie. Despite the variety of bries, the French government officially certifies only two types of cheese to be sold under that name: Brie de Meaux and Brie de Melun.

Brie de Meaux, manufactured at the town of Meaux in the Brie region on northern France since the 8th century, was originally known as the "King's Cheese", or, after the French Revolution, the "King of Cheeses," and was enjoyed by the peasantry and nobility alike. It was granted the protection of Appellation d'origine contrôlée status in 1980, and it is produced primarily in the eastern part of the Parisian basin.