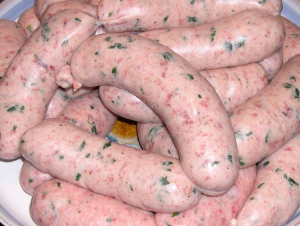 Bangers are a type of sausage common to the UK. They are often an essential part of pub food, as they are quick to prepare, but they're also often made at home.  The name comes from the sausage’s tendency toward bursting or “banging” open during high frying temperatures. In fact, to avoid losing some of the sausage, they can be boiled first, and sliced lengthwise prior to frying or grilling.

These sausages are white or pink and are made primarily of pork butt, a small amount of breadcrumbs, and water. They are normally pleasantly spiced with both sweet and savory spices. The average banger will have both salt and pepper, as well as sage, ginger and mace or allspice. Spices differ depending upon the brand.

The ingredients are well mixed, and then stuffed into casings, as is usual with most sausages. Casings are usually made from pork or sheep intestines, and look like long translucent ropes.

Some bangers are pre-cooked, which makes them easy to cook and helps ensure that the interior of the sausage will be cooked through. Sausages that are not pre-cooked often should be boiled before they are fried so the interior meat, which is not cooked, has a chance to come to a high temperature before they are finished in a hot pan. This way, they're well cooked and have a crisp skin.

In the UK, bangers may be served with breakfast, and they make part of one of the most traditional of English dishes, bangers and mash. This is actually a quite simple dish, usually made up of two sausages served over mashed potatoes. They may also be served in sandwiches with grilled onions.
Post your comment ...
sign in with ...
missing class include : daIp