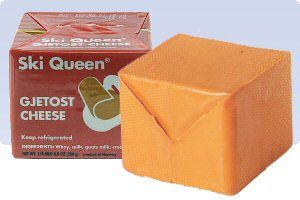 Another variant, made using goat milk, is referred to and sold as geitost (Norwegian for "goat cheese") or sometimes elsewhere as gjetost (an older Dano-Norwegian spelling no longer used in Norway). Geitost is made from a mixture of goat's and cow's milk, and ekte geitost (real geitost) is made with goat's milk only.

Brunost is made by boiling a mixture of milk, cream, and whey carefully for several hours so that the water evaporates. The heat turns the milk sugar into caramel, which gives the cheese its characteristic brown colour and sweet taste. It is ready for consumption as soon as it is packed in suitable sized blocks. A low-fat variant is made by increasing the proportion of whey to milk and cream.

If boiled for a shorter time, the soft, spreadable version called prim in Norwegian (or messmör in Swedish and mysingur in Icelandic), similar to dulce de leche, is produced. Prim had been made in Norway for a long time when Anne Haav (Anne Hov in some sources), a budeie in Gudbrandsdalen, got the idea of putting cream into the cheese and invented the Fløtemysost. She found that the cheese was better and easier to cut by increasing the percentage of fat with the addition of cream. She received a good price for her new cheese, and this merchandise is said to have saved the Gudbrandsdalen financially in the 1880s. In 1933, when Anne Haav was 87 years old, she was awarded the King's Medal of Merit in silver.

Brunost is manufactured primarily in Norway, but also has traditionally been produced in Jämtland and Härjedalen in Sweden. The cheese is sold by specialty cheese shops and some larger supermarkets in North America and Europe. Today, several types of brunost are offered in most shops in Norway and Sweden.

TINE produces most of the brunost in Norway, and currently has 12 varieties to choose from. In Sweden, Fjällbrynt is the biggest producer and produces brunost called Fjällbrynt Mesost in the city of Östersund. In Iceland, Mjólkursamsalan produces brunost. Several local dairies in Norway produce their own versions.