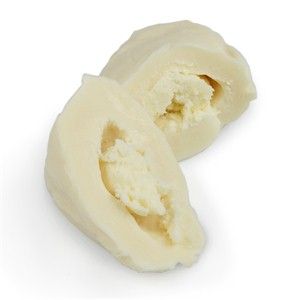 Burrata is a fresh Italian cheese, made from mozzarella and cream. The outer shell is solid mozzarella while the inside contains both mozzarella and cream, giving it an unusual, soft texture. It is also defined by some sources as an outer shell of mozzarella filled with butter or a mixture of butter and sugar. It is usually served fresh, at room temperature. The name "burrata" means "buttered" in Italian.

Burrata starts out much like mozzarella and many other cheeses, with rennet used to curdle the warm milk. But then, unlike other cheeses, fresh mozzarella curds are plunged into hot whey or lightly salted water, kneaded and pulled to develop the familiar stretchy strings, then shaped in whatever form is desired.

When making burrata, the still-hot cheese is formed into a pouch, which is then filled with scraps of leftover mozzarella and topped off with fresh cream before closing. The finished burrata is traditionally wrapped in the leaves of asphodel, tied to form a little brioche-like topknot, and moistened with a little whey. The asphodel leaves should still be green when the cheese is served, to indicate the cheese's freshness. More recently the cheese is often sold in a plastic bag or container.

When the burrata is sliced open, ritagli-thickened panna flows out. The cheese has a rich, buttery flavor and retains its fresh milkiness. It is best when eaten within 24 hours, and is considered past its prime after 48 hours. The flavour and different textures of the inside and outside make it go well with salad, prosciutto crudo, crusty bread, fresh tomatoes with olive oil, and cracked black pepper, or pasta.

Serving Burrata Cheese:
Being an artisan product, Burrata Cheese is traditionally enjoyed on its own, with little accompaniment. Sliced tomatoes, olive oil, basil, and a dash of cracked black pepper is the only adornment Burrata needs. Thin slices of prosciutto are another delicious option. Another classic duo is blanched haricot vert green beans with Burrata Cheese, a pairing popularized by a restaurant scene in the television series, The Sopranos.

Once you've decided on how you want to enjoy Burrata Cheese, serving is simple. Slice the Burrata down the middle, allowing the rich, creamy center to pour out across the plate. Make sure you have some good, crusty bread on hand for mopping up the last, luxurious drops.