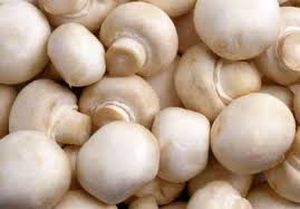 The button mushroom, better known as a white mushroom or sometimes Agaricus bisporus is the most widely cultivated, harvested, and distributed mushroom in the world. The mildly flavored, hardy fungus can be found fresh, dried, and canned in grocery stores all over the world. It has two color states while immature—white and brown—both of which have various names. When mature, the same mushroom is known as Portobello mushroom.
When immature and brown this mushroom may be known variously as Swiss brown mushroom, Roman brown mushroom, Italian brown, Italian mushroom, cremini or crimini mushroom, brown cap mushroom, or chestnut mushroom.

The button mushroom has a classic mushroom like appearance, with a short thick stalk and a white cap. The mushroom is gilled beneath the smooth cap, and a small ring of flesh surrounds the stem where it meets the cap. When young, this ring of flesh forms a veil over the gills of the mushroom. This mushroom can be found growing almost anywhere, including lawns, compost piles, leaf mold, wood chips, dead trees, and well fertilized soil. They are easy to identify and to pick, making them a popular choice for mushroom hunters.
The brown variety of the button mushroom is often found marketed as a crimini mushroom. Crimini mushrooms have a darker and more earthy flavor which some consumers like because it adds complexity to food. Allowed to grow to a large size, this mushroom is also packed and sold under the portobello mushroom label. Portobello mushrooms are usually quite large, and also have a rich flavor which pairs with a meaty texture. All varieties of button mushroom pack and ship well, and tend to be very stable if kept in dry, cool conditions.
When selecting button mushrooms for eating, look for specimens which still have tightly closed veils covering the gills. Also try to pick out firm dry specimens without a slimy texture or cracks. Store the mushrooms in a paper bag in a cool part of the fridge, and try to use them within one week. When you are ready to use mushrooms, brush them lightly to remove dirt and leaf mold or wash them if the mushrooms are being used immediately. Mushrooms are extremely porous and soak up water like a sponge.

The button mushroom is a delicious edible mushroom, and can be used in a wide array of dishes. Fresh, button mushrooms are excellent on pizzas ( Also see ), salads ( Also see 1, 2, 3 ), stir fries, and stews. Dried, they can be used to lend a deep, earthy flavor to stews and stuffings. The myriad uses for this flexible fungus are limited only by the imagination of the cook.

Mushroom powder can easily be made by grinding dried button mushrooms in a spice or coffee grinder, food processor, or heavy-duty blender. Use to flavor soups ( Also see ), stews, stocks, dips, and sauces ( Also see), Sauteed , roasted.
Trim and freeze them to use in soups and stocks.
Tips

1. Because they are mostly water, never soak fresh mushrooms and also be aware that salt releases the water in mushrooms, so judge the salt usage accordingly for your particular recipe.

2. An egg-slicer makes quick work of slicing mushrooms into uniform pieces. Cut edges of mushrooms will turn dark when exposed to air. When they will be served raw, cut just before serving or wipe the cut edges with lemon juice in order to protect color.

4. Avoid aluminum pans when cooking light-colored mushrooms. The aluminum will discolor the mushrooms.

5. Since mushrooms contain so much water, no additional liquid is needed when cooking them in a microwave. Do not cover.
Health Benefits of Button Mushroom

White mushrooms are a very good source of copper, selenium, riboflavin, niacin, and panothenic acid, and a good source of potassium. They also have been found to have high levels of some antioxidant compounds that may help prevent some cancers.

While Agaricus bisporus only contains 16 IU of vitamin D as ergocalciferol (vitamin D2), since they also contain high amounts of ergosterol, by temporary exposure to UV light, the ergocalciferol contents increase.

White button mushrooms, the popular ones you see in all the grocery stores, have a surprising amount of nutrients including: Niacin, Riboflavin, Folate, Phosphorus, Iron, Panthothenic Acid, Zinc, Potassium, Copper, Magnesium, Vitamin B6, Selenium, Thiamin.

In addition, white button mushroom extract has been found to reduce the size of some cancer tumors and slow down the production of some cancer cells. It is most prominently linked to reducing the risk of breast and prostate cancer.

A great Weight Loss Food, an Excellent Source of Potassium. Shitake mushrooms in particular are also high in the beta-glucan Lentinan. Lentinan has been linked with strengthening the immune system and helping combat illnesses that attack the immune system like AIDS.