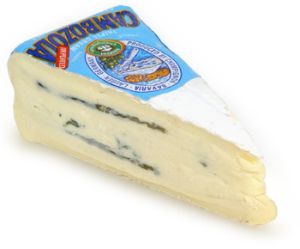 Cambozola is a cow's milk cheese that is a combination of a French soft-ripened triple cream cheese and Italian Gorgonzola.
It was patented and industrially produced for the world market by large German company Champignon in the 1970s. The cheese was invented c. 1900 and is still produced by Champignon. In English-speaking countries, Cambozola is often marketed as blue brie.

It is made from a combination of Penicillium camemberti and the same blue Penicillium roqueforti mold used to make Gorgonzola, Roquefort, and Stilton. Extra cream is added to the milk, giving Cambozola a rich consistency characteristic of triple crèmes, while the edible bloomy rind is similar to that of Camembert. Cambozola is considerably milder than Gorgonzola and features a smooth, creamy texture with a subdued blue flavour.

The cheese's name appears to be a portmanteau of Camembert and Gorgonzola, given that its flavour profile combines the moist, rich creaminess of Camembert with the sharpness of blue Gorgonzola. It also refers to the Roman name Cambodunum of the city Kempten, where Champignon is located.