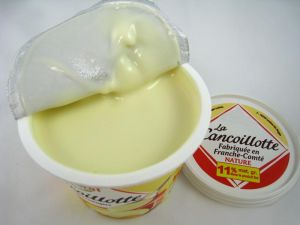 Cancoillotte or Cancoyotte is a runny French cheese made principally in Franche-Comté, but also Lorraine and Luxembourg, where it is also called Kachkéis or Kochkäse in German. It is a typical cheese in Franc-Comtois gastronomy. It is eaten all year around, served cold or hot.

Made from metton, Cancoillotte is typically sold in quantities averaging 200 grams. The cheese appeared no later than the 16th century. The name dates from the 19th century, from "coille," derived from cailler (to curdle), referring to milk left after cream extraction (resulting in a lower fat content).

The cheese is typically served melted over a small flame, with a little water or milk, and salt or butter added before serving. Sometimes garlic is added as well. Cancoillotte is good melted with lots of butter. Recently there are commercial versions with wine, cumin or other additions.

Cancoillotte is sold pre-melted in supermarkets, especially in the east of France. In Luxembourg, Kachkéis is usually eaten on an open sandwich on which mustard has been smeared as well.