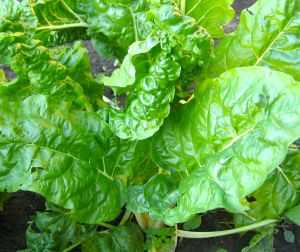 Chard is a leafy green vegetable often used in Mediterranean cooking. The leaves can be green or reddish in color like Bibb Lettuce; chard stalks also vary in color. Chard has been bred to have highly nutritious leaves and is considered to be one of the most healthful vegetables available, making it a popular addition to healthful diets (like other green leafy vegetables).
Classification
Chard and the other beets are chenopods, a group which is either its own family Chenopodiaceae or a subfamily within the Amaranthaceae. Although the leaves of chard are eaten, it is in the same species as beetroot (garden beet), which is grown primarily for its edible roots. Both are cultivated descendants of the sea beet, Beta vulgaris subsp. maritima, but they were selected for different characteristics.
Chard is also known by its many common names such as Swiss chard, silverbeet, perpetual spinach, spinach beet, crab beet, bright lights, seakale beet, and mangold. In South Africa, it is simply called spinach.
Culinary use

Fresh young chard can be used raw in salads. Mature chard leaves and stalks are typically cooked (like in pizzoccheri) or sauteed; their bitterness fades with cooking, leaving a refined flavor which is more delicate than that of cooked spinach.

In Egyptian cuisine, chard is commonly cooked with taro root and coriander in a light broth
Nutritional content
Swiss chard is high in vitamins A, K and C, with a 175 g serving containing 214%, 716%, and 53%, respectively, of the recommended daily value. It is also rich in minerals, dietary fiber and protein.
All parts of the chard plant contain oxalic acid.
Recipe using Chard.
Read More at Wikipedia.