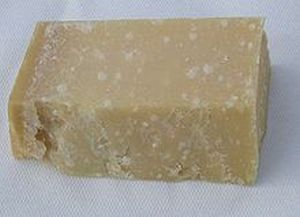 Cheese crystals are whitish, semi-solid to solid, slightly crunchy to gritty crystalline spots, granules, and aggregates that can form on the surface and inside of cheese. Cheese crystals are characteristic of many long-aged hard cheeses.

Hard cheeses where cheese crystals are common and valued include aged cheddar, grana cheeses like parmesan and grana padano, and old gouda. However, in some cheeses, like industrial cheddar, they are considered a production defect.

For grana padano, grainy amino acid crystals inside the cheese consisting mainly of tyrosine and of leucine and isoleucine have been reported. In general, any substance that has a low solubility in water and a tendency to crystallize could form crystals as the cheese dries out during aging.