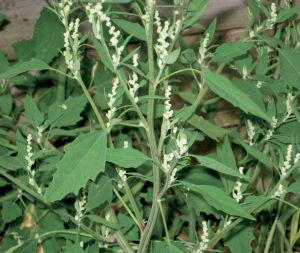 Chenopodium album is a fast-growing weedy annual plant in the genus Chenopodium.
Though cultivated in some regions, the plant is elsewhere considered a weed. Common names include lamb's quarters, melde, goosefoot and fat-hen, though the latter two are also applied to other species of the genus Chenopodium, for which reason it is often distinguished as white goosefoot. It is sometimes also called pigweed, however, pigweed is also a name for a few weeds in the family Amaranthaceae,: it is for example used for the redroot pigweed.
Chenopodium album is extensively cultivated and consumed in Northern India as a food crop, and in English texts it may be called by its Hindi name bathua or bathuwa. It is called Pappukura in Telugu, Paruppukkirai in Tamil, Kaduoma in Kannada, Vastuccira in Malayalam, and Chakvit in Konkani. 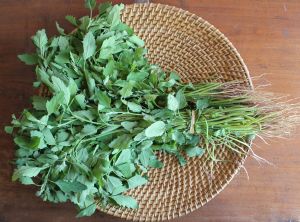 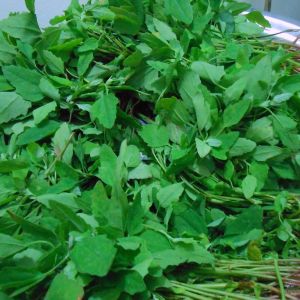 Botany
It tends to grow upright at first, reaching heights of 10–150 cm (rarely to 3 m), but typically becomes recumbent after flowering (due to the weight of the foliage and seeds) unless supported by other plants. The leaves are alternate and can be varied in appearance. The first leaves, near the base of the plant, are toothed and roughly diamond-shaped, 3–7 cm long and 3–6 cm broad. The leaves on the upper part of the flowering stems are entire and lanceolate-rhomboid, 1–5 cm long and 0.4–2 cm broad; they are waxy-coated, unwettable and mealy in appearance, with a whitish coat on the underside. The small flowers are radially symmetrical and grow in small cymes on a dense branched inflorescence 10–40 cm long.
Uses and consumption
Food
The leaves and young shoots may be eaten as a leaf vegetable, either steamed in its entirety, or cooked like spinach, but should be eaten in moderation due to high levels of oxalic acid. Each plant produces tens of thousands of black seeds. These are high in protein, vitamin A, B-complex vitamins, vitamin C, calcium, phosphorus, and potassium trace minerals, iron and fibre. . Quinoa, a closely related species, is grown specifically for its seeds. The Zuni people cook the young plants' greens.
Archaeologists analysing carbonized plant remains found in storage pits and ovens at Iron Age, Viking Age, and Roman sites in Europe have found its seeds mixed with conventional grains and even inside the stomachs of Danish bog bodies.
In India, the plant is popularly called bathua and found abundantly in the winter season. The leaves and young shoots of this plant are used in dishes such as soups, curries, and paratha-stuffed breads ( also see), especially popular in Punjab. The seeds or grains are used in phambra or laafi, gruel-type dishes in Himachal Pradesh, and in mildly alcoholic fermented beverages such as soora and ghanti.

The young leaves and smaller stems can be eaten raw in salads. It can be used to make delicious raita or used as a stuffing for pakodas. Also, try adding it to dough to give a distinctive taste to rotis, puris and parathas.
Bathua finds a use in the treatment of some skin conditions, and the oil made from these leaves is used to treat hook worms.

Health Benefits of Bathua or Goosefoot
Goosefoot or Bathua leaves and seeds are very nutritious. They are non-toxic and consumed all across the world for centuries. Like any other leafy vegetable they offer innumerable health benefits.
1. Bathua leaves are very good source of high quality protein, nutrients, antioxidants and vitamins, particularly vitamin c and vitamin A. Its vitamin A content is comparable to carrots. About 2 cups of leaves provides 14, 000-16, 000 units of vitamin A (daily requirement is about 5000 units) and 60-130 mg of vitamin C (daily requirement is 70mg)
2. The leaves are rich in fibre and have laxative properties which cures constipation. Due to this property Bathua is also useful in piles.
3. Bathua seeds are rich in amino acids. Amino acids are the basic building blocks of the body and performs several important function in body.
4. Bathua leaves are good source of potassium, iron, calcium, and zinc.
5. Bathua is good for heart. It is considered heart tonic.
6. Bathua leaves are good for liver, spleen and gall bladder. You may drink 10 ml juice of leaves for keeping digestive system healthy.
7. The juice of Bathua leaves purifies blood.
8. Bathua improves haemoglobin level.
9. Bathua leaves juice is a traditional medicine for intestinal parasites. For this purpose 10-15 ml juice of leaves is added with pinch of rock salt and is taken three times a day after meals.
10. Bathua improves appetite. You may use leaves as Salad with tomato, lemon juice and pinch of salt.
Read More at Wikipedia.
Recipe for Bathua bhujia, Bathua ka rayta, Bathue Ki Sabji.
Post your comment ...
sign in with ...