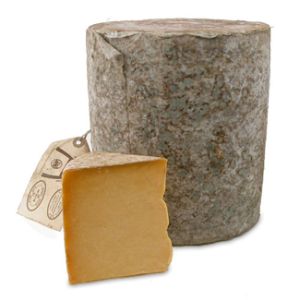 Cheshire cheese is a dense and crumbly cheese produced in the English county of Cheshire, and four neighbouring counties, two in Wales (Denbighshire and Flintshire) and two in England (Shropshire and Staffordshire).

Cheshire cheese is one of the oldest recorded named cheeses in British history: it is first mentioned, along with Shropshire, by Thomas Muffet in Health's Improvement. Indeed, Cheshire cheese is Britain's oldest cheese. There is no earlier specific mention of the cheese of the county, but the importance of Cheshire as one of the main dairy regions of England is already emphasised by William of Malmesbury in the Chester section of his Gesta pontificum Anglorum.

Cheshire was the most popular cheese on the market in the late 18th century. In 1758 the Royal Navy ordered that ships be stocked with Cheshire and Gloucester cheeses. By 1823, Cheshire cheese production was estimated at 10,000 tonnes per year; in around 1870, it was estimated as 12,000 tons per year.

Until the late 19th century, the different varieties of Cheshire cheeses were aged to a sufficient level of hardness to withstand the rigours of transport to London for sale. Younger, fresher, crumbly cheese that required shorter storage — similar to the Cheshire cheese of today — began to gain popularity towards the end of the 19th century, particularly in the industrial areas in the North and the Midlands. It was a cheaper cheese to make as it required less storage.

Sales of Cheshire cheese peaked at around 40,000 tonnes in 1960, subsequently declining as the range of cheeses available in the UK grew considerably. Cheshire cheese remains the UK's largest-selling crumbly cheese, with sales of around 6,500 tonnes per year.

The county remains an important centre for cheese and holds the Nantwich International Cheese Awards.

Cheshire cheese is dense and semi-hard, and is defined by its moist, crumbly texture and mild, salty taste. Industrial versions tend to be drier and less crumbly, more like a mild Cheddar cheese, as this makes them easier to process than cheese with the traditional texture. The Cheshire family of cheeses is a distinct group that includes other crumbly cheeses from the North of England such as Wensleydale and Crumbly Lancashire.

Red: Red Cheshire, coloured with annatto to a shade of deep orange, was developed in the hills of North Wales and sold to travellers on the road to Holyhead. This trade was so successful that the travellers came to believe that all Cheshire cheese was orange, and producers in its home county were obliged to dye their cheese in order to match the expectations of the market.

Blue: Blue Cheshire has blue veins like Stilton or Shropshire blue, but is less creamy than Stilton and is not coloured orange as Shropshire Blue is. It has a long history, but production ceased in the late 1980s. Recently it has been revived by several manufacturers in England.