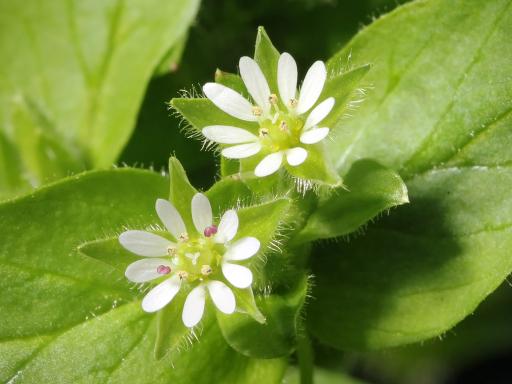 Stellaria media, chickweed, is a cool-season annual plant native to Europe, which is often eaten by chickens. It is sometimes called common chickweed to distinguish it from other plants called chickweed. Other common names include chickenwort, craches, maruns, winterweed. The plant germinates in fall or late winter, then forms large mats of foliage. Flowers are small and white, followed quickly by the seed pods. This plant flowers and sets seed at the same time.

Distribution
Stellaria media is widespread in North America and Europe. There are several closely related plants referred to as chickweed, but which lack the culinary properties of plants in the genus Stellaria. Plants in the genus Cerastium are very similar in appearance to Stellaria and are in the same family (Carophyllaceae). Stellaria media can be easily distinguished from all other members of this family by examining the stems.