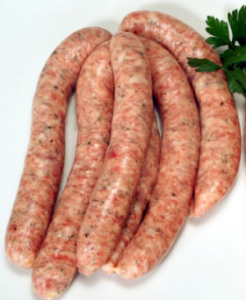 Chipolatas are small pork sausages that are Italian in origin. They are enjoyed throughout Europe, with special popularity in the UK as a breakfast sausage. The origins of these sausages suggest however, that Italians most frequently used these them as main dishes during luncheon or dinner meals.

Records dating back almost 400 years make note of an Italian onion stew called cipollata, which may have at least occasionally included the addition of pork sausages. The term cipollata is more closely connected to the Italian word for onion, cipolla than it is to a word for sausage. So the stew may not have always included these sausages.

In France, chipolatas are often served as an addition to meats or vegetables that are fried and then glazed with Madeira. Such a dish may be called a la chipolata, meaning with sausages.

Chipolatas in France often differ slightly in ingredients than their British cousins. The French sausages tend to be made of coarsely ground pork butt or shoulder, stuffed into a casing. Seasonings may include coriander, chives and thyme. Occasionally cloves or red pepper flakes may be added to the mix before the meat mixture is stuffed into casings.

British chipolatas usually add rice to the meat, which cuts down a little on fat content, but does add more carbohydrates. Often, the British refer to any types of small pork sausages as by this name. The French tend to be more particular in defining chipolatas as a specific type of sausage.

Most US residents know chipolatas as an Italian sausage, though they greatly resemble many of the breakfast link sausages commonly in use. They may be a nice change as they offer extra spice and an “Italian” flavor, which can enliven omelets or make an excellent addition to traditional egg dishes, like fried, poached, or scrambled eggs. These sausagesare especially good in frittatas, or for an Italian inspired quiche as well.