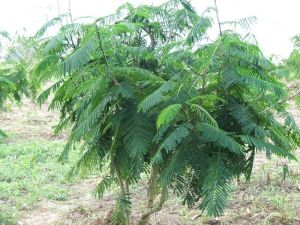 Senegalia pennata (English: Climbing wattle, Thai: Cha-om, Burmese Su pout ywet, Hmar Khanghmuk), is a species of legume which is native to South and Southeast Asia. It is a shrub or small tropical tree which grows up to 5 metres in height. Its leaves are bipinnate with linear-oblong and glabrous pinnules. Its yellowish flowers are terminal panicles with globose heads. The pods are thin, flat and long with thick sutures. 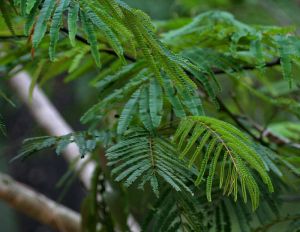 In India, the Northeast State Manipur use climbing wattle as ingredient for indigenous cuisine like Kaang-hou (Fried Vegetables), Eromba and much more. Its locally known as Khanghmuk.

In Burma, Laos, Indonesia and Thailand, the feathery shoots of Senegalia pennata are used in soups, curries,  Fried Egg With Climbing Wattle, and stir-fries. The edible shoots are picked up before they become tough and thorny.

In Northern Thai cuisine Cha-om is also eaten raw with Thai salads, such as Tam Mamuang (mango salad), and it is one of the ingredients of the Kaeng khae curry.  In Central Thailand and Isan it is usually boiled or fried. Cha-om omelet pieces are one of the usual ingredients of Nam phrik pla thu and commonly used in Kaeng som, a sour Thai curry.