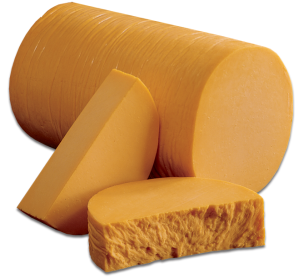 Colby is a cow's milk cheese.
Joseph F. Steinwand in 1874 developed a new type of cheese at his father's cheese factory near Colby, Wisconsin. The cheese was named after the village, which had been founded three years earlier. While Colby cheese is still available for sale, it is no longer produced in its native Colby, Wisconsin.

A festival commemorating the cheese is held every year in mid-July where all local food booths offer free Colby cheese as well as bison burgers and ice cream milkshakes. A tractor and ATV pull also occurs during the festival on First Street.

An 1898 issue of the Colby Phonograph noted that "A merchant in Phillips gives as one of the 13 reasons why people should trade with him, that he sells the genuine Steinwand Colby Cheese."

Colby is similar to Cheddar, but does not undergo the cheddaring process. Considered a semi-hard cheese, Colby is softer, moister, and milder than cheddar because it is produced through a washed-curd process.

The washed-curd process means that during the cooking time, the whey is replaced by water; this reduces the curd's acidity, resulting in Colby's characteristically mild flavor. As with most other cheeses, it takes a little more than a U.S. gallon of milk to produce one pound of cheese. Monterey Jack cheese is produced almost identically to Colby, but is uncolored and softer.

Longhorn is the best known style of the American Colby cheeses. "Longhorn" refers to the long orange cylindrical shape of the cheese. Colby is available in both its original shape and in rectangles and half rounds. Colby is not aged and dries out quickly.

Because it is such a mild cheese, Colby is seldom used in cooking. It is typically used as a table cheese, for grating and grilling, and in snacks and salads.