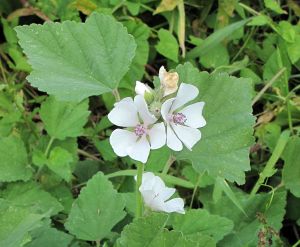 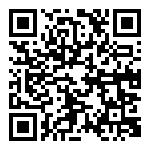 Althaea officinalis (marshmallow, marsh mallow, or common marshmallow) is a perennial species indigenous to Africa, which is used as a medicinal plant and ornamental plant. A confection made from the root since ancient Egyptian time evolved into today's marshmallow treat.
Description

The stems, which die down in the autumn, are erect, 3 to 4 ft, simple, or putting out only a few lateral branches. The leaves, shortly petioled, are roundish, ovate-cordate, 2 to 3 in long, and about 11/4 inch broad, entire or three to five lobed, irregularly toothed at the margin, and thick. They are soft and velvety on both sides, due to a dense covering of stellate hairs. The flowers are shaped like those of the common mallow, but are smaller and of a pale colour, and are either axillary, or in panicles, more often the latter.
The entire plant, particularly the root, abounds with a mild mucilage, which is emollient to a much greater degree than the common mallow. The generic name, Althaea, is derived from the Greek, from its healing properties. The name of the family, Malvaceae, is derived from the Greek, from the special qualities of the mallows in softening and healing.
Most of the mallows have been used as food, and are mentioned by early classic writers with this connection. Mallow was an esculent (edible) vegetable among the Romans; a dish of marsh mallow was one of their delicacies. Prosper Alpinus stated in 1592 that a plant of the mallow kind was eaten by the Egyptians. Many of the poorer inhabitants of Syria subsist for weeks on herbs, of which marsh mallow is one of the most common. When boiled first and fried with onions and butter, the roots are said to form a palatable dish, and in times of scarcity consequent upon the failure of the crops, this plant, which fortunately grows there in great abundance, is collected heavily as a foodstuff.
Traditional uses
The leaves, flowers and the root of A. officinalis all have medicinal properties. It is claimed to increase the flow of breast milk and soothe the bronchial tubes.
Marshmallow is traditionally used as a treatment for the irritation of mucous membranes, including use as a gargle for mouth and throat ulcers, and gastric ulcers. A study on rats concluded that an extract from the flowers has potential benefits for hyperlipidemia, gastric ulcers and platelet aggregation. The root has been used since the Middle Ages in the treatment of sore throat.
The root extract (halawa extract) is sometimes used as flavouring in the making of a Middle Eastern snack called halva. The flowers and young leaves can be eaten, and are often added to salads or are boiled and fried.
The later French version of the recipe, called pâte de guimauve, included an eggwhite meringue and was often flavoured with rose water. Pâte de guimauve more closely resembles contemporary commercially available marshmallows, which no longer contain any actual marshmallow.