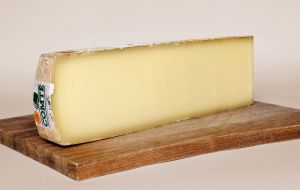 Comté (also called Gruyère de Comté) is a French cheese made from unpasteurized cow's milk in the Franche-Comté region of eastern France. Comté has the highest production of all French AOC cheeses, around 40,000 tonnes annually.

The cheese is made in flat circular discs, each between 40 centimetres and 70 centimetres in diameter, and around 10 centimetres in height. Each disc weighs up to 50 kilograms with an FDM around 45%. The rind is usually a dusty-brown colour, and the internal pâte is a pale creamy yellow. The texture is relatively hard and flexible, and the taste is strong and slightly sweet.

Fresh from the farm, milk is poured into large copper vats where it is gently warmed. Each cheese requires up to 600 litres  of milk. Rennet is added, causing the milk to coagulate. The curds are then cut into tiny white grains that are the size of rice or wheat which are then stirred before being heated again for around 30 minutes. The contents are then placed into moulds and the whey is pressed out. After several hours the mould is opened and left to mature in cellars, first for a few weeks at the dairy, and then over several months elsewhere.

Most Comté cheeses are aged from 12 to 18 months, though some are aged as little as four months and as long as 24 months. Some places, especially high-class restaurants, can carry Comtés aged for a longer time. The restaurant L'Arpège in Paris, France, is known to carry a four-year-old Comté.