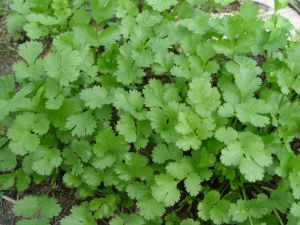 Coriander, also known as cilantro, Chinese parsley or dhania, is an annual herb in the family Apiaceae.

Coriander is one of the world's most commonly used herbs. It is green, leafy and strong-smelling with a fresh, citrus taste that makes it an invaluable garnish and flavour enhancer. Both the fresh leaves and stalks are edible, as well as the berries, which are dried and called coriander seeds. Native to southern Europe and the Middle East, the plant is now grown worldwide. Coriander tends to be associated most with Asian and Central and South American cooking. For maximum flavour, it is best added to dishes just before serving.

Culinary Uses
1. The fresh leaves are an ingredient in many South Asian foods (particularly chutneys), in Chinese dishes and in Mexican salsas and guacamole.
2. In Mexico and the South western U.S. it is used in everything from salsas and salads to burritos or meat dishes.
3. Chopped coriander leaves are a garnish on cooked dishes such as dal( 1 & 2 ) and curries. As heat diminishes their flavor quickly, coriander leaves are often used raw or added to the dish right before serving.
4. In Indian and Central Asian recipes, coriander leaves are used in large amounts in gravies and as green  curry pastes.
5. Coriander's leaves is used as seasoning in curries, salads and soup and its dried ripe spherical seeds mostly in powder form is slightly roasted and used as curry powder in dishes, to flavour cakes, cookies, alcoholic beverages such as gin etc
6. Coriander roots have a deeper, more intense flavour than the leaves. They are used in a variety of Asian cuisines. They are commonly used in Thai dishes, including soups , and green curry pastes, pesto.

Coriander, like many spices, contains antioxidants, which can delay or prevent the spoilage of food seasoned with this spice.

Coriander has been used as a folk medicine for the relief of anxiety and insomnia in Iran. Coriander seeds are used in traditional Indian medicine as a diuretic by boiling equal amounts of coriander seeds and cumin seeds, then cooling and consuming the resulting liquid. In holistic and traditional medicine, it is used as a carminative and as a digestive aid.

Coriander has been documented as a traditional treatment for type 2 diabetes.

Coriander seeds were found in a study on rats to have a significant hypolipidaemic effect, resulting in lowering of levels of total cholesterol and triglycerides, and increasing levels of high-density lipoprotein. This effect appeared to be caused by increasing synthesis of bile by the liver and increasing the breakdown of cholesterol into other compounds.

Coriander can produce an allergic reaction in some people.

Vitamin K in it is good for the treatment of Alzheimer's disease. The fat soluble vitamin and antioxidant- Vitamin A, protects from lung and cavity cancers. Coriander contains anti-inflammatory properties. This is why it is good against inflammatory diseases such as arthritis. Coriander's anti-septic properties help to cure mouth ulcer.

Another important health benefit of coriander is that it is good for the eyes. Antioxidants in coriander prevent eye diseases and problems. It’s a good remedy in the treatment of conjunctivitis.

Coriander seeds are especially good for the menstrual flow. It’s a very good herb to promote the nervous system. It can stimulate the memory.

In addition, coriander provides health benefits to the persons who are suffering from anemia. Coriander contains high amounts of iron, which is essential for curing anemia.