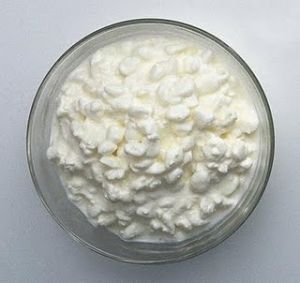 Cottage cheese is a cheese curd product with a mild flavor. It is drained, but not pressed, so some whey remains and the individual curds remain loose. The curd is usually washed to remove acidity, giving sweet curd cheese. It is not aged or colored. Different styles of cottage cheese are made from milks with different fat levels and in small-curd or large-curd preparations. Cottage cheese which is pressed becomes hoop cheese, farmer cheese, pot cheese, or queso blanco.

Cottage cheese can be eaten by itself, with fruit and sugar, with salt and pepper, with fruit puree, on toast, with tomatoes, with granola and cinnamon, in salads, or used as an ingredient in recipes such as jello salad and various desserts. Cottage cheese with fruit such as pears or peaches is a standard side dish in many "home cooking" or meat-and-three restaurants' menus in the United States.

The first known use of the term "cottage cheese" dates back to 1831 and is believed to have originated because the simple cheese was usually made in cottages from any milk left over after making butter. The curds and whey of nursery rhyme fame is another dish made from curds with whey, but it is uncertain what their consistency was, if they were drained at all or how they were curdled (which affects the flavor). Some writers claim they are equivalent or similar.

The curd size is the size of the "chunks" in the cottage cheese. The two major types of cottage cheese are small-curd, high-acid cheese made without rennet, and large-curd, low-acid cheese made with rennet. Rennet is a natural complex of enzymes that speeds curdling and keeps the curd that forms from breaking up; adding it shortens the cheesemaking process, resulting in a lower acid and larger curd cheese, and reduces the amount of curd poured off with leftover liquid (the whey). Sometimes large-curd cottage cheese is called "chunk style."