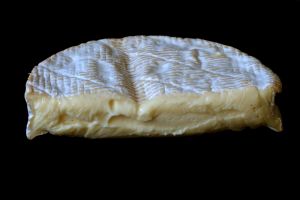 Coulommiers is a soft ripened cheese from Coulommiers in the Seine-et-Marne department of France. It is made from cow's milk, and is usually in the shape of a disc with white, bloomy, edible Penicillium candidum rind. When produced as an artisanal or "farmhouse" cheese from unpasteurised milk, it has some reddish blush in parts of the rind. The period of ripening when made of pasteurised whole milk is about four to six weeks. The fat content is 40 per cent.

Coulommiers is a lesser-known cousin of Brie, although it has been produced for longer. It is smaller and thicker than Brie and with a nuttier flavour, but otherwise has similar characteristics, with a similar buttery colour and supple texture. The cheese may be either farmer-made or industrially produced, however the industrial version lacks the depth of an unpasteurized cheese. Because it is not an AOC cheese, producers can make it with pasteurized milk and ship it to the United States.