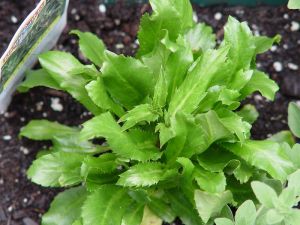 Eryngium foetidum is a tropical perennial and annual herb in the family Apiaceae. Common names include culantro, Mexican coriander and long coriander. It is native to Mexico and South America, but is cultivated worldwide. In the United States, where it is not well known outside Latino and Caribbean communities, the name culantro sometimes causes confusion with Coriandrum sativum, the leaves of which are known as cilantro, and which culantro is said to taste like a stronger version.

Culinary
Culantro is widely used in seasoning and marinating in the Caribbean, particularly in Panama, Puerto Rico and Trinidad and Tobago, and in Peru's Amazon regions. It is also used extensively in Thailand, India, Vietnam, Laos, and other parts of Asia as a culinary herb. It dries well, retaining good color and flavor, making it valuable in the dried herb industry. It is sometimes used as a substitute for cilantro (coriander in British English), but it has a much stronger taste.
In the United States, culantro grows naturally in Florida, Georgia, Hawaii, Puerto Rico, and the Virgin Islands. It is sold in grocery stores as a culinary herb under the common names; "culantro".

1. The leaves of these herbal plants are rich in calcium, carotene, iron and riboflavin. They are also a good source of various vitamins including vitamins A, B1, B2 and C. Other nutrients include protein, fat, carbohydrate and phosphorus.

2. The leaves of these herbal plants are used for diverse culinary and medicinal purposes. Their culinary uses are sometimes similar to the uses of cilantro due to the resemblance in the fragrances of the leaves of these two plants.

4. This herb is used for marinating and seasoning in many Caribbean countries. These leaves are widely used in Thai cuisine to add flavor to noodle dishes, soups and curries. It is a popular herb in other Asian countries like India, Singapore, Vietnam and Malaysia. This herb is one of the basic ingredients for preparing the popular sauces “Salsa” and “Sofrito”.

5. It is traditionally used as a herbal medicine for numerous health disorders like diarrhea, fever and vomiting.

6. Leaves and roots of these medicinal plants are boiled in water to use the water as a remedy for diseases like pneumonia, malaria, flu and diabetes.

7. These leaves are used to treat stomachache, constipation and worms.

8. The roots of these plants are consumed to treat scorpion stings.