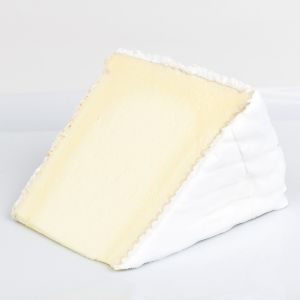 Délice de Bourgogne, also known as Delice cheese, is a French cow's milk cheese from the Burgundy region of France. The cheese is rich and creamy due to the cheese-making process where crème fraîche in this case is added twice to the milk during the making of the cheese. This cheese also has a strong pungent aroma due to its ripening process. It has an average weight of 2 kg, and a rind similar to that of Brie.

Made by Fromagerie Lincet, in the Burgundy region of France, Delice de Bourgogne is a classic triple creme cheese, much in the style of other classics, such as Brillat Savarin or Explorateur.

The basis for production of a triple creme cheese (according to French regulations) is that fresh cream, or creme fraiche, is added to full-fat cow's milk, thereby creating incredibly rich, full-flavored but mellow cheese with a smooth, melt-in-the-mouth texture.

Made in a 4.5lb. wheel, the rind of Delice de Bourgogne is white and bloomy as a result of the Penicilium Candidum mold. The interior paste is ivory-white-creamy in color and the texture in the center of the cheese is velvety and smooth, becoming softer or runny towards the rind as the cheese matures.