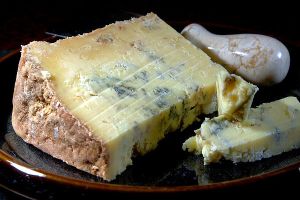 Dorset Blue Vinney (frequently spelled "vinny") is a traditional blue cheese made near Sturminster Newton in Dorset, England, from skimmed cows' milk. It is a hard, crumbly cheese. "Vinney" is a local Dorset term related to the obsolete word "vinew", which means to become mouldy. Another explanation has it that "vinny" is a corruption of "veiny", referring to the blue veins running throughout the cheese.

Historically the cheese was merely a by-product of the much more lucrative butter market. Milk was of little value before the railways as it couldn't be brought to market before it went off, thus cheese and butter production was the main focus of dairy farms. Dorset butter was highly regarded in London where it fetched a premium price but making butter left the farmers with large quantities of skimmed milk which they turned into a hard, crumbly cheese.

While the cheese was a common farmhouse cheese in Dorset for hundreds of years, production dried up around 1970 and the cheese became extinct. However, in the 1980s Woodbridge Farm in Dorset revived the old recipe, and it is now producing the cheese again.