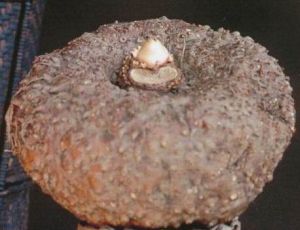 Amorphophallus paeoniifolius, the Elephant foot yam or Whitespot giant arum or Stink lily, is a tropical tuber crop that offers excellent scope for adoption in the tropical countries as a cash crop due to its production potential and popularity as a vegetable in various delicious cuisines.

Elephant foot yam is basically a crop of Southeast Asian origin. It grows in wild form in Sri Lanka, the Philippines, Malaysia, Indonesia, and other Southeast Asian countries. In India it is grown mostly in West Bengal, Kerala, Karnataka, Andhra Pradesh, Maharashtra and Orissa. In India it is popularly known as  suran or jimikand in Hindi, suvarna gedde in Kannada, chena in Malayalam, oluo in Oriya, and kanda gadda in Telugu.

However, in Tonga, teve was seen as the most inferior of all yam species, only to be eaten if really nothing else was available.

In West Bengal , these yams are eaten as fried or as yam curry. The plant body of elephant foot yam is also eaten in West Bengal as green vegetable called Bengali: "ol shaak".

Along with other therapeutic applications, The Ayurvedic Pharmacopoeia of India indicates the use of corm in prostatic hyperplasia. (The corm is irritant due to the presence of calcium oxalate. It can be consumed after it is washed well and boiled in tamarind water or butter milk.) The corm contains an active diastatic enzyme amylase, betulinic acid, tricontane, lupeol, stigmasterol, betasitosterol and its palmitate and glucose, galactose, rhamnose and xylose.

Intake of 3.6 - 7.2 g of konjac mannan for 90 days reduced the dose of insulin or hypoglycaemic drugs (in human clinical study). (Francis Brinker.) Amorphophallus sylvatius Kunth. is equated with the wild var. of Suurana, used especially in the treatment of piles.

The vegetable also suits people with hypertension as it has a cooling effect on the body.

Yam is considered to be a healthy low-fat food so it can be consumed without any fear of weight gain.

It is a rich source of essential fatty acids (Omega-3 fatty acids) which are known to increase the good cholesterol levels in the blood.

It also act as anticoagulant (prevents blood from clotting).

Yam offers special health benefits to people with diabetes as it has a very low glycemic index.

Yam is also high in vitamin B6. Consuming vitamin B6 provides relief from pre-menstrual syndrome in women.

Yam is known to contain Diosgenin, a hormonal molecule that is currently being experimented for its potential anticancer effects.

It is a natural product that is high in fiber .

So it can be used as slimming food because it lowers cholesterol levels and promotes weight loss.

It is a natural cure for constipation and irregular bowel movements.

Yam also has a high concentration of key minerals. It is loaded with potassium, magnesium and phosphorous, as well as with trace minerals like selenium, zinc and copper.