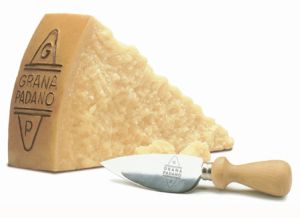 Grana Padano is one of the most popular cheeses of Italy. The name comes from the noun grana (‘grain’), which refers to the distinctively grainy texture of the cheese, and the adjective Padano, which refers to the valley Pianura Padana. (The reason this cheese is called "Grana Padano" and not "Grana Padana" is because in this case the Italian word grana is the masculine noun, il grana, describing this specific cheese, and not the feminine noun la grana, which means "grain").

Grana Padano is one of the world's first hard cheeses, created nearly 900 years ago by the Cistercian monks of Chiaravalle Abbey, founded in 1135 near Milan, who used ripened cheese as a way of preserving surplus milk. By the year 1477, it was regarded as one of the most famous cheeses of Italy. It can last a long time without spoiling, sometimes aging up to two years. It is made in a similar way to the Parmigiano Reggiano of Emilia-Romagna but over a much wider area and with different regulations and controls. Other grana cheeses are also made in Lombardy, Piedmont, Trentino, and Veneto.

Like Parmigiano Reggiano, Grana Padano is a semifat hard cheese which is cooked and ripened slowly (for at least 9 months, then, if it passes the quality tests, it will be fire-branded with the Grana Padano trademark). The cows are milked twice a day, the milk is left to stand, and then partially skimmed. Milk produced in the evening is skimmed to remove the surface layer of cream and mixed with fresh milk produced in the morning.

The partly skimmed milk is transferred into copper kettles and coagulated; the resulting curd is cut to produce granules with the size of rice grains, which gives the cheese its characteristic texture, and then cooked to 53-56°C. It is produced year-round and the quality can vary seasonally as well as by year. Though similar to Parmigiano Reggiano cheese, the younger Grana Padano cheeses are less crumbly, milder and less complex in flavor than their more famous, longer-aged relative.

A wheel of Grana Padano is cylindrical, with slightly convex or almost straight sides and flat faces. It measures 35 to 45 cm in diameter, and 15 to 18 cm in height. It weighs 24 to 40 kg per wheel. The rind, which is thin, is white or straw yellow.