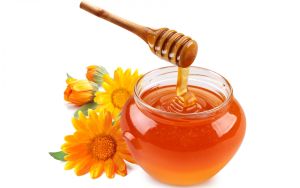 Honey is a sweet food made by bees using nectar from flowers. The variety produced by honey bees is the one most commonly referred to, as it is the type of honey collected by most beekeepers and consumed by humans. Honeys produced by other bees (bumblebees, stingless bees) and insects (honey wasps) have different properties, and they are not discussed in this article.

Honey bees transform nectar into honey by a process of regurgitation and evaporation. They store it as a primary food source in wax honeycombs inside the beehive.

Honey gets its sweetness from the monosaccharides fructose and glucose, and has approximately the same relative sweetness as granulated sugar. It has attractive chemical properties for baking and a distinctive flavor that leads some people to prefer it over sugar and other sweeteners. Most microorganisms do not grow in honey because of its low water activity of 0.6. However, honey sometimes contains dormant endospores of the bacterium Clostridium botulinum, which can be dangerous to infants, as the endospores can transform into toxin-producing bacteria in infants' immature intestinal tracts, leading to illness and even death.

Honey has a long history in human consumption, and is used in various foods and beverages as a sweetener and flavoring. It also has a role in religion and symbolism. Flavors of honey vary based on the nectar source, and various types and grades of honey are available. It is also used in various medicinal traditions to treat ailments. The study of pollens and spores in raw honey can determine floral sources of honey. Bees carry an electrostatic charge whereby they attract other particles in addition to pollen, which become incorporated into their honey; the honey can be analysed by the techniques of melissopalynology in area environmental studies of radioactive particles, dust and particulate pollution.

Honey contains flavonoids, antioxidants which help reduce the risk of some cancers and heart disease.

Recent research shows that honey treatment may help disorders such as ulcers and bacterial gastroenteritis. This may be related to the 3rd benefit…

“All honey is antibacterial, because the bees add an enzyme that makes hydrogen peroxide,” said Peter Molan, director of the Honey Research Unit at the University of Waikato in New Zealand.

Ancient Olympic athletes would eat honey and dried figs to enhance their performance. This has now been verified with modern studies, showing that it is superior in maintaining glycogen levels and improving recovery time than other sweeteners.


Honey has been used in ayurvedic medicine in India for at least 4000 years and is considered to affect all three of the body’s primitive material imbalances positively. It is also said to be useful useful in improving eyesight, weight loss, curing impotence and premature ejaculation, urinary tract disorders, bronchial asthma, diarrhea, and nausea.

Honey is referred as “Yogavahi” since it has a quality of penetrating the deepest tissues of the body. When honey is used with other herbal preparations, it enhances the medicinal qualities of those preparations and also helps them to reach the deeper tissues.

Even though honey contains simple sugars, it is NOT the same as white sugar or artificial sweeteners. Its exact combination of fructose and glucose actually helps the body regulate blood sugar levels. Some honeys have a low hypoglycemic index, so they don’t jolt your blood sugar. (Watch this video Sweetener Comparison where I compare stevia, brown rice syrup, honey, molasses and agave, and discuss the strengths and weaknesses of each.)

External application of honey has been shown to be as effective as conventional treatment with silver sulfadiazene. It is speculated that the drying effect of the simple sugars and honey’s anti-bacterial nature combine to create this effect.

Its anti-bacterial qualities are particularly useful for the skin, and, when used with the other ingredients, can also be moisturizing and nourishing! For a powerful home beauty treatment for which you probably have all the ingredients in your kitchen already, read Carrot Face Mask.