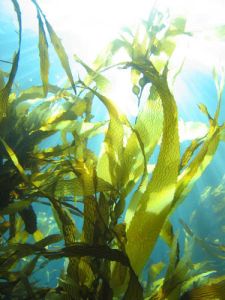 A brown seaweed that grows in ocean water. It is a source of alginic acid, which is used to produce alginate gum which functions as a water control agent. It contains the trace minerals potassium, sodium, calcium, and iodine.

Uses:
Kombu is a very important ingredient in Chinese, Japanese, and Korean cuisines.

Kombu is used to flavor broths and stews (especially dashi), as a savory garnish (tororo konbu) for rice and other dishes, as a vegetable, and a primary ingredient in popular snacks (such as tsukudani).

Transparent sheets of kelp (oboro konbu) are used as an edible decorative wrapping for rice and other foods.

Kombu can be used to soften beans during cooking, and to help convert indigestible sugars and thus reduce flatulence.

Because of its high concentration of iodine, brown kelp (Laminaria) has been used to treat goiter, an enlargement of the thyroid gland caused by a lack of iodine, since medieval times.