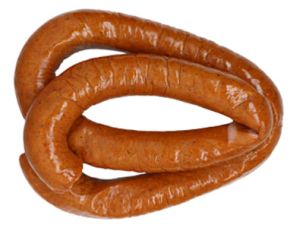 Kielbasa is literally the Polish word for sausage, although native Poles consider it to be a generic term, much like asking for a non-specific soda in a restaurant. There are dozens of varieties available, so shoppers would need to know the specific name of the sausage they desire. In the United States, however, the term "smoked Polish sausage" has almost become synonymous with kielbasa when describing a precooked smoked sausage made with pork, garlic, marjoram, salt and pepper.

Many varieties of sausage sold in grocery stores are of the uncooked German variety, but a true kielbasa is sold precooked in a large hog casing. It is the smoking process that separates it from other pork sausages. Kielbasa is also seasoned with spices such as garlic and marjoram, not the sage or Italian spices often found in uncooked sausages.

Kielbasa is traditionally served with vegetables such as onions, cabbage and red potatoes. It can also be used in conjunction with, or in place of, the smoked andouille sausage often featured in Cajun cooking. Gumbo recipes may call for cooked smoked sausage, and kielbasa makes a good addition to the traditional Cajun side dish of red beans and rice.
Post your comment ...
sign in with ...

This is also Good cooked on the grill. :•?