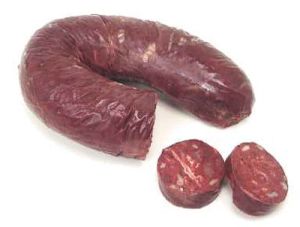 Kishka or kishke refers to various types of sausage or stuffed intestine with a filling made from a combination of meat and meal, often a grain. The dish is popular across Eastern Europe as well as with immigrant communities from those areas. It is also eaten by Ashkenazi Jews who prepare their version according to kashrut dietary laws. The name itself is Slavic in origin, and literally means "gut" or "intestine."

One Eastern European kishka type is kaszanka, a blood sausage made with pig's blood and buckwheat or barley, with pig intestines used as a casing.Similar to black pudding, it is traditionally served at breakfast.

Kishkas can also be made with an organ meat, such as liver and various grain stuffings. The cooked kishke can range in color from grey-white to brownish-orange, depending on how much paprika is used and the other ingredients. There are also vegetarian kishka recipes.

The sausages are popular in areas of the Midwestern United States, where many Poles emigrated. There are numerous mail order companies and delis that sell various kishkas. As blood is often used as an ingredient, kishkas are considered an acquired taste.

Greater Bialystok Area Kiszka is usually made in a way very similar to the Jewish kishke, but in the majority of cases, pig intestines are used, and ground potatoes are the main ingredient.
Post your comment ...
sign in with ...
missing class include : daIp