Lard is pig fat in both its rendered and unrendered forms. Lard was commonly used in many cuisines as a cooking fat or shortening, or as a spread similar to butter. Its use in contemporary cuisine has diminished; however, many contemporary cooks and bakers favor it over other fats for select uses. The culinary qualities of lard vary somewhat depending on the part of the pig from which the fat was taken and how the lard was processed.

Types of Fat From A Hog
Back Fat or Fatback : This is the fat that comes from the back of the animal along with its shoulder and rump. It’s literally the layer of fat directly below the skin. It’s usually sold in pieces and often with the skin still attached. Rendered back fat is great for sauteing and frying.
Belly : The pork belly. Rich soft and firm fat layered with meat. In the United States we use it mostly to cure bacon. That’s right, bacon is cured pork belly! Because of the meat intertwined with the fat it also makes a great roast or check out my steamed pork buns using pork belly.
Leaf Lard : Leaf lard is the fat from around the pig’s kidneys. This is the cleanest fat on the animal and is therefore the crème de la crème of pork fat. This is the fat that you want to make sure to render appropriately in order to have a pure white, odorless lard to use for your pastries. Leaf lard is used to make perfectly flaky pie crusts and traditional Spanish polvorones. 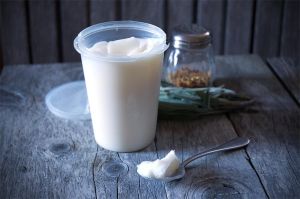 Use of Lard
Lard has always been an important cooking and baking staple in cultures where pork is an important dietary item, the fat of pigs often being as valuable a product as their meat.
1. Because of the relatively large fat crystals found in lard, it is extremely effective as a shortening in baking. Pie crusts made with lard tend to be more flaky than those made with butter. Many cooks employ both types of fat in their pastries to combine the shortening properties of lard with the flavor of butter.
2. Lard was once widely used in the cuisines of Europe, China, and the New World and still plays a significant role in British, Central European, Mexican, and Chinese cuisines. In British cuisine, lard is used as a traditional ingredient in mince pies and Christmas puddings, lardy cake and for frying fish and chips, as well as many other uses.
3. Lard is traditionally one of the main ingredients in the Scandinavian pâté leverpostej.
4. In Spain, one of the most popular versions of the Andalusian breakfast includes several kinds of mantecas differently seasoned, consumed spread over toasted bread. Among other variants, manteca colorá (lard with paprika) and zurrapa de lomo (lard with pork flakes) are the preferred ones. In Catalan cuisine lard is used to make the dough for the pastry known as coca. In the Balearics particularly, ensaimades dough also contains lard.
5. Lard consumed as a spread on bread was once very common in Europe and North America, especially those areas where dairy fats and vegetable oils were rare
6. Cooking Oil, Because of its stability, its high smoke point (which approaches 400 degrees Fahrenheit), and its special flavor, lard is a highly favored oil for frying.
7. Baking,  Bakers treasure lard particularly “leaf lard,” that rendered from the fat adjoining the hog’s kidneys and abdomen as a shortening in pastry dough and pie crusts, used to produce a flakier, more tender confection. Lard's coveted performance in such desserts stems from its good-sized fat crystals, which lend a grainy edge to the baked good’s texture.
8. Other Culinary Uses,  A classic and reburgeoning European snack has it simply accompanying bread as a spread or a dip.
9. Seasoning Cast Iron,  Lard is a fine choice for seasoning cast-iron cookware, maintaining a nonstick and protective sheen.
10. Medicinal, Lard has been widely used around the world in folk remedies, applied as a poultice to burns, cuts, and inflamed areas.