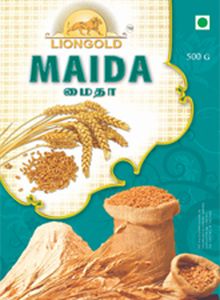 Maida is made from the endosperm (the starchy white part) of the grain, while the fibrous bran is removed in the mill.

Maida is a finely milled and refined and bleached wheat flour, closely resembling cake flour, and used extensively in making Pakistani/Indian fast food, Indian bakery products such as pastries and bread, varieties of sweets and sometimes in making traditional Afghani/Pakistani/Indian breads such as paratha and naan.