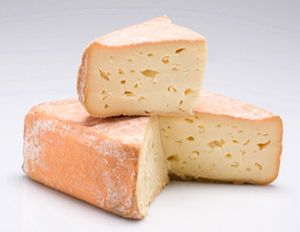 Maroilles is a cow's-milk cheese made in the regions of Picardy and Nord-Pas-de-Calais in northern France. It derives its name from the village of Maroilles in the region in which it is still manufactured.

The cheese is sold in individual rectangular blocks with a moist orange-red washed rind and a strong smell. In its mass-produced form it is around 13 cm square and 6 cm in height, weighing around 700 g. In addition, according to its AOC regulations, cheeses eligible for AOC status can be one of three other sizes:

The curd is shaped and salted before being removed from its mould and placed in a ventilated drying area for around ten days during which time a gentle light coating of bacteria develops. The cheese is then brushed and washed and cellared for at least five weeks, though periods of up to four months are not uncommon. During this time it is turned and brushed at regular intervals to remove the natural white mould to allow its red bacteria to change the rind from yellow to red.

The finished cheese is a minimum of 45% fat, and is made in both pasteurized and unpasteurized forms. AOC status was granted in 1976 with AOP status following in 1996.In 2005 2,126 tonnes were made, of which around 6% came from the 10 fermier producers, with the remainder being made by the three industriel producers.