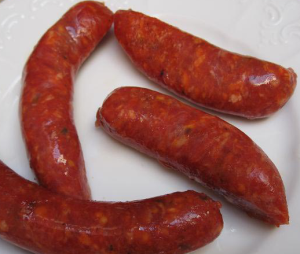 Merguez is a red, spicy mutton or beef-based fresh sausage in North African cuisine. It is also popular in the Middle East, and Europe, having become particularly popular in France by the closing decades of the twentieth century.

Merguez is a fresh sausage made with lamb, beef, or a mixture stuffed into a lamb-intestine casing. It is heavily spiced with cumin and chili pepper or Harissa, which gives it its characteristic piquancy and red color, as well as other spices such as sumac, fennel, and garlic.

Merguez is usually eaten grilled or with couscous. Dried merguez is used to add flavor to tagines. It is also eaten in sandwiches and with french fries.
Post your comment ...
sign in with ...
missing class include : daIp