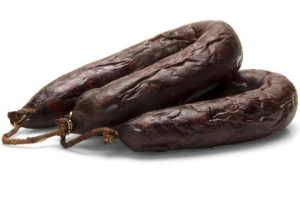 Morcela is a traditional Portuguese and Brazilian black sausage typically served in a number of regions. The black pudding made in the region of Guarda is recognized as having high quality, as well as the Azores and Portalegre. Norcela is made with a combination of pork (from pigs of the Alentejo breed), pork cheeks, and bacon, which have been cut into relatively large pieces. Seasonings may include ground pepper (or sweet pepper paste), wine, salt, garlic, dried garlic, spices (including cloves and cumin), and preservatives. Pig's blood is used as a binder, which gives consistency and dark color. It is smoked using wood from the holmoak, in a slow smoking process, at a temperature of 30 to 40 ºC (85-105 °F) for a period of no less than three days.

It is produced in a cylindrical shape with a reddish-brown color. Its interior is marbled and red in color. The length of the sausages varies from 3.9—5.9 in, and their approximate diameter is 2 in. The weight varies from 200—250 g.

It can be eaten raw, sliced very thinly, as an appetizer or with a good regional bread, or along with typical Portuguese dishes. When it is served cooked, it may be accompanied by boiled greens.