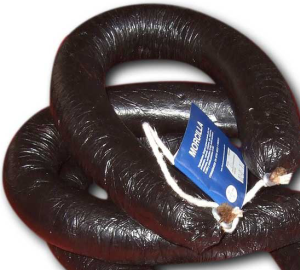 Morcilla or Blood Sausage is popular both as a tapa and as an ingredient in stews. Morcilla is generally a thicker sausage, about 2 1/2 to 3 inches across, stuffed with pig’s blood, rice, onions and spices, although like all Spanish cuisine, ingredients will vary from region to region. Morcilla from Burgos has the reputation for being the best in Spain.

To eat as a tapa or snack, Spaniards generally cut morcilla into thick slices (1 inch or so) and fry it in a bit of olive oil, then eat it with bread. It is also a favorite ingredient in stews and bean dishes, and is placed in the pot with other ingredients to simmer.
Post your comment ...
sign in with ...
missing class include : daIp