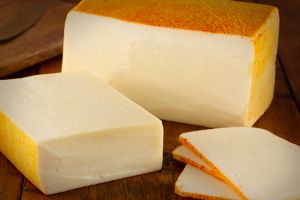 Muenster or munster is a semi-soft cheese from the United States, not to be confused with the French variety, Munster. The original name of the French cheese comes from the Alsatian abbey of Munster in the Vosgian mountains. Munster translates as "monastery", derived from Latin monasterium.

Its taste varies from bland, like a white American cheese, to sharp, like a jack cheese. Muenster cheese is lower on fat per serving than many other popular store bought cheeses such as cheddar cheese, mozzarella cheese, and Monterey jack style cheese.

Muenster is pale in color and smooth in texture with an orange rind. It is made from cows’ milk. The orange color is a vegetable coloring. It usually has a very mild flavor and smooth, soft texture. In some cases, when properly aged, it can develop a strong flavor with a pungent aroma.

This cheese is commonly served as an appetizer. Because it melts well, it is also often used in dishes such as grilled cheese sandwiches, tuna melts, quesadillas, cheeseburgers, macaroni and cheese, and pizza. Little Caesars Pizza, in their 2013 television commercial, revealed they use both muenster and mozzarella rather than cheese byproducts. In the commercial the wedge of muenster was much larger than the wedge of mozzarella, implying that muenster is the dominant cheese used.