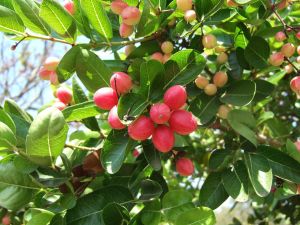 Carissa macrocarpa, is a shrub native to South Africa, where it is commonly called the Large Num-Num. In Zulu, as well as in the Bantu tribes of Uganda, it is called amatungulu. In Afrikaans the fruit is called Noem-Noem.

C. macrocarpa deals well with salt-laden winds, making it a good choice for coastal areas. It is commonly found in the coastal bush of the Eastern Cape and Natal. It produces shiny, deep green leaves and snowy white flowers whose perfumed scent intensifies at night. Like other Carissa species, C. macrocarpa is a spiny, evergreen shrub containing latex.

They bloom for months at a time. The ornamental plump, round, crimson fruit appears in summer and fall (autumn) at the same time as the blooms. In moderate, coastal areas the fruits appear through the year. The fruit can be eaten out of hand or made into pies, jams, jellies, and sauces. Some claim that other than the fruit, the plant is poisonous. However this claim is a myth, possibly based on similarities to other plants with milky sap. The California Poison Control System rates the plant as mildly toxic.

The entire plant except for its red colored fruit is poisonous.Only the fruit of this plant is edible and though it is called a plum it hardly tastes like one. The fruit tastes a less sweet version of cranberries with the texture of a strawberry or a somewhat unripe cherry.

The Natal Plum grows in mounds form 2 to 7 feet and as much across. It tolerates drought and is a low maintenance shrub, though it grows fast and is evergreen. It is almost pest free.

The plant has shiny, thick and leathery dark green leaves. It bears star shaped flowers the emit a sweet jasmine like scent which deepens at night. The flowers blooms for several months at a stretch though the plant fruits in summer and autumn or in autumn and winter in warmer climates. In coastal areas and moderate climates it can be seen fruiting the year round.

The fruit is green when unripe and turns a bright red when ripe. It also contains latex though the ripe fruit has a much lower content than the unripe fruit. The whole fruit including the seeds can be eaten safely. When boiled however, the latex leaves the fruit and sticks to the sides of the pot. This can be removed easily by rubbing it with oil. Of course, the fruit should not be boiled or stewed in an aluminium pot.

Apart from eating the fruit as it is, it can be made into jams, jellies, pies and sauces or it can be used in desserts, yogurt, ice cream etc.

The Natal plum is a major component of commercial landscaping along sea walls, hotel and restaurant landscapes as also a hedge or barrier plant and as a ground or slope cover. Apart from this, an interesting feature of this plant is a nutritional secret.

A secret that is not evident at all when one looks at the plant from a landscaping point of view or a security point of view. It is however a traditional African food plant with many nutrients.

Especially Vitamin C; in fact it has more Vitamin C than in an orange. 100 grams of the natal Plum provides 63% of the daily requirement of this vitamin.

Vitamin C is an antioxidant vitamin that boosts the immunity, delays aging, heals wounds, improves teeth and gum health and has a host of other health benefits as well.

Natal Plum also has a good amounts of Iron and copper that not only prevents anemia and builds hemoglobin but also prevents weakness and fatigue, depression and dizziness.

It also contains the heart friendly magnesium and is low in calories.

Thus the Natal Plum is a very useful plant and the fruits can even be pickled. In the video below, pickle is made from the Karonda fruit, the Indian counterpart of the Natal Plum.