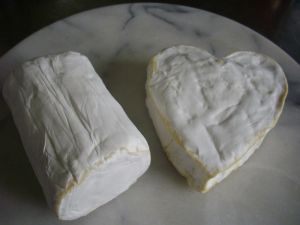 Neufchâtel is a soft, slightly crumbly, mould-ripened cheese made in the French region of Normandy. One of the oldest cheeses in France, its production is believed to date back to the 6th century. It looks similar to Camembert, with a dry, white, edible rind, but the taste is saltier and sharper. It has the aroma and taste of mushrooms. Unlike other soft-white-rinded cheeses, Neufchâtel has a grainy texture.  It is most usually sold in heart shapes but is also produced in other forms, such as logs and boxes. It is typically matured for 8–10 weeks.

Neufchatel is a traditional, soft-white, table cheese, originating from the village of Neufchâtel-en-Bray in northern Normandy. Made from cow’s milk, it is one of France’s oldest cheeses, dating back as far as 1035.

The cheese is made in many forms, shapes and sizes - bonde (cylinders), coeur (heart shape), carre (square shape) and briquette (brick shape). Legend goes that French farm girls fell in love with English soldiers during the Hundred Years War and started making heart shaped cheeses to show their love.