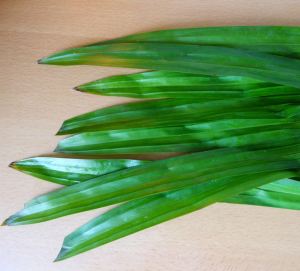 Pandanus amaryllifolius is a tropical plant in the Pandanus genus, which is commonly known as pandan leaves, and is used widely in Southeast Asian cooking as a flavoring agent. The characteristic aroma of pandan leaves is caused by the aroma compound 2-acetyl-1-pyrroline, which also gives white bread, jasmine rice and basmati rice (as well as bread flowers Vallaris glabra) their typical smell. The plant is rare in the wild but is widely cultivated.

It is an upright, green plant with fan-shaped sprays of long, narrow, blade-like leaves and woody aerial roots. The plant is sterile, flowers only grow very rarely, and is propagated by cuttings.

In Bangladesh it is called ketaki, along with the other variety of pandan there, and is used to enhance the flavor of pulao, biryani and sweet coconut rice pudding, payesh. It is called pandan wangi in Indonesian, hsun hmway in Burmese, pandan in Filipino, bai tooey in Thai, rampe in Sinhala, sleuk toi in Khmer, Daun Pandan in Nonya cooking, "fragrant plant" in Magahi and Bhojpuri due to its fragrance.

The leaves are used either fresh or dried, and are commercially available in frozen form in Asian grocery stores in nations where the plant does not grow. They have a nutty, botanical fragrance which enhances the flavor of Indonesian, Singaporean, Filipino, Malaysian, Thai, Bangladeshi, Vietnamese, Chinese, Sri Lankan, Khmer and Burmese foods, especially rice dishes and cakes.

The leaves are sometimes steeped in coconut milk, which is then added to the dish. They may be tied in a bunch and cooked with the food. They may be woven into a basket which is used as a pot for cooking rice. Pandan chicken, or kai op bai toei, is a Thai dish with chicken wrapped in pandan leaves and baked. The leaves are also used as a flavoring for desserts such as pandan cake and sweet beverages. Filipinos use pandan as a flavoring in buko pandan salad.

Bottled pandan extract is available in shops; it often contains green food coloring. The leaves have a repellent effect on cockroaches.

6• Functions as a laxative for children

10• Pandan flowers have also been traced with characteristics that function as aphrodisiac.

12• It can also be used as antiseptic and anti-bacterial, which makes it ideal for healing wounds.