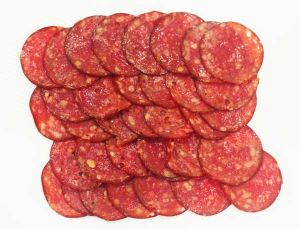 Pepperoni, also known as pepperoni sausage, is an American variety of salami, usually made from cured pork or beef. Pepperoni is characteristically soft, slightly smoky, and bright red in color. Thinly sliced pepperoni is a popular pizza topping in American-style pizzerias and is used as filling in the West Virginia pepperoni roll. It is also used to make some varieties of submarine sandwiches.

Pepperoni is usually made from pork or beef. Turkey is also commonly used as a substitute, but the use of poultry in pepperoni must be appropriately labeled in the United States. In the Caribbean Islands and other parts of the world, donkey and horse meat is a common ingredient. Sodium nitrite (or sometimes saltpeter), usually a part of modern curing agents, protects against botulism and other forms of microbiological decay. Sodium nitrite itself is white, but reacts to give pepperoni its reddish colour. The use of paprika and cayenne also contribute to its reddish color.
Pepperoni sausages are commonly sold in two sizes: an inch in diameter for pizza and two to three inches in diameter for sandwiches. Pepperoni is sold whole, chopped, or in slices, and is commonly found in American deli counters.

Ingredients like peppers, garlic, fennel, or mustard seeds can be included in the production of pepperoni to provide different flavors and levels of spiciness. Likewise, the type of meat used to produce pepperoni can vary. Pepperoni may be substituted by similar cured meats like Genoa salami, soppressata, or chorizo.
Pepperoni has a tendency to curl up from the edges in the heat of a pizza oven. Some pepperoni is produced in thicker slices, so that the edges curl intentionally