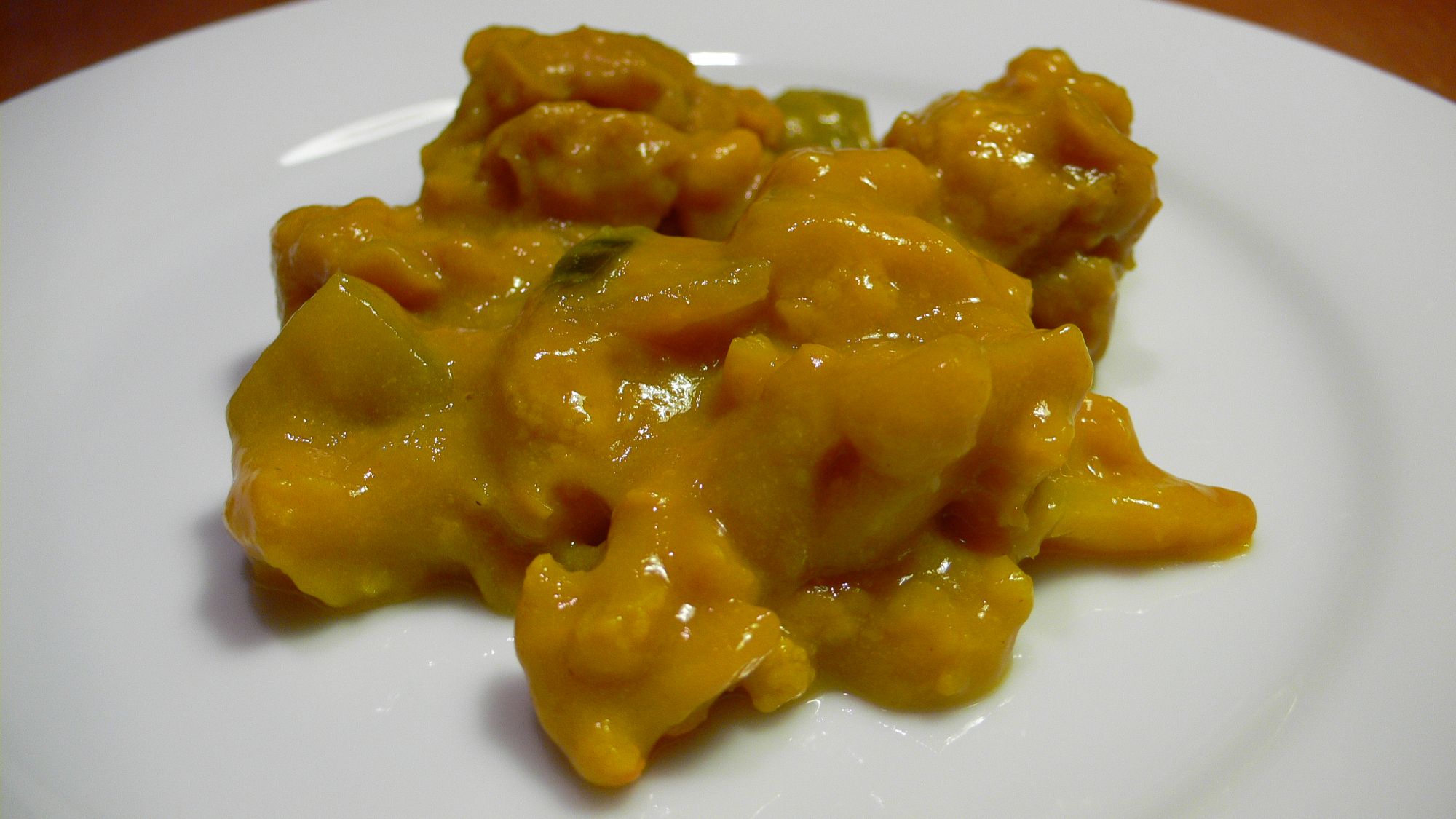 Piccalilli is an English interpretation of Indian pickles, a relish of chopped pickled vegetables and spices; regional recipes vary considerably.
British piccalilli
British piccalilli contains various vegetables – invariably cauliflower and vegetable marrow – and seasonings of mustard and turmeric. A more finely chopped variety "sandwich piccalilli" is also available from major British supermarkets. It is used as an accompaniment to foods such as sausages, bacon, eggs, toast, cheese, and tomatoes. It is similar to a sweet pickle such as Branston Pickle, except it is tangier and slightly less sweet, coloured bright yellow (using turmeric) rather than brown, and the chunks are larger. It is usually used to accompany a dish on a plate rather than as a bread spread. It is popular as a relish with cold meats such as ham and brawn, and with a ploughman's lunch. It is produced both commercially and domestically, the latter product being a traditional mainstay of Women's Institute and farmhouse product stalls.
American piccalilli
In the Northeastern United States, commercial piccalillis are based on diced sweet peppers, either red or green. This style is somewhat similar to sweet pepper relish, with the piccalilli being distinguished by having a darker red or green color and like British piccalilli, the chunks are larger and it is tangier and slightly less sweet. It is a popular topping on such foods as hamburgers and hot dogs. Traditional, British-style yellow piccalilli is also available.
In the Midwestern United States, commercial piccalillis are based on finely chopped gherkins; bright green and on the sweet side, they are often used as a condiment for Chicago-style hot dogs. This style is sometimes called "neon relish".
In the Southern United States, piccalilli is not commonly served. In its place, chow-chow, a relish with a base of chopped green (unripe) tomatoes is offered. This relish may also include onions, bell peppers, cabbage, green beans and other vegetables. While not exactly similar to other piccalillis, chow-chow is often called as such and the terms may be used interchangeably.
Surinamese piccalilli
A far spicier variant of piccalilli comes from the former Dutch colony of Suriname, where traditional British piccalilli is mixed with a sambal made of garlic and yellow Madame Jeanette peppers. This piccalilli is often homemade but can also be bought in jars in Dutch corner shops. Whilst Surinamese piccalilli is similar in appearance to ordinary piccalilli, the taste is much spicier. Tourists visiting the Netherlands, and especially Amsterdam, are often unaware of this which can lead to unexpected results.
Read More at Wikipedia.
Recipe for piccalilli see Here and Here.
Post your comment ...
sign in with ...