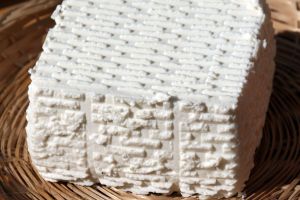 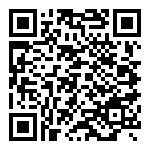 Ricotta is an Italian whey cheese made from sheep (or cow, goat, or Italian water buffalo) milk whey left over from the production of cheese.

Like other whey cheeses, it is made by coagulating the keratin proteins that remain after the casein has been used to make cheese, notably albumin and globulin. Thus, ricotta can be eaten by persons with casein intolerance.

Ricotta (literally meaning "recooked") uses whey, the liquid that remains after straining curds when making cheese. Most of the milk protein (especially casein) is removed when cheese is made, but some protein remains in the whey, mostly albumin.

This remaining protein can be harvested if the whey is first allowed to become more acidic by additional fermentation (by letting it sit for 12–24 hours at room temperature). Then the acidified whey is heated to near boiling. The combination of low pH and high temperature denatures the protein and causes it to precipitate out, forming a fine curd. Once cooled, the curd is separated by passing through a fine cloth.

Ricotta curds are creamy white in appearance, slightly sweet in taste, and contain around 13% fat. In this form, it is somewhat similar in texture to some cottage cheese variants, though considerably lighter. It is highly perishable. However, ricotta also comes in aged varieties which are preservable for much longer.

Fresh ricotta can be subjected to extra processing to produce variants which have a much longer shelf life. These production methods include salting, baking, smoking and fermentation.Ricotta salata is a pressed, salted, dried, and aged variety of the cheese. It is milky-white and firm, and used for grating or shaving. Ricotta salata is sold in wheels, decorated by a delicate basket-weave pattern.

Ricotta affumicata is similar to ricotta infornata. It is produced by placing a lump of soft ricotta in a smoker until it develops a grey crust and acquires a charred wood scent, usually of oak or chestnut wood, although, in Friuli, beech wood is used, with the addition of juniper and herbs.

Ricotta forte, also known as ricotta scanta, is produced from leftovers of any combination of cow, goat or sheep milk ricotta. These are allowed to ferment for approximately a year, during which the cheese is mixed every two or three days to prevent the growth of mold. Salt is added as well. The end result is a soft and creamy brown paste which has a very pungent and piquant taste. It is produced in the southern part of the Province of Lecce and sold in glass jars. It is smeared on bread, mixed with tomato sauces for pasta or added to vegetable dishes.

Like mascarpone in northern-Italian cuisine, ricotta is a favorite component of many Italian desserts, such as cheesecakes and cannoli. There are also a variety of different cookies that include ricotta as an ingredient.

Ricotta can be beaten smooth and mixed with condiments, such as sugar, cinnamon, orange flower water, strawberries, and occasionally chocolate shavings, and served as a dessert. This basic combination (often with additions such as citrus and pistachios) also features prominently as the filling of the crunchy tubular shell of the Sicilian cannoli, and layered with slices of cake in Palermo's cassata.

Combined with eggs and cooked grains, then baked firm, ricotta is also a main ingredient in Neapolitan pastiera, one of Italy's many "Easter pies".

It also makes a suitable substitute for mayonnaise in traditional egg or tuna salad and as a sauce thickener.

It is often used as a substitute for paneer in the Indian dessert known as Ras Malai. However, paneer is mostly casein protein, similar to Cottage Cheese, while Ricotta is made of all whey protein. Studies suggest that "supplementation with whey protein improves blood pressure and vascular function in overweight and obese individuals".