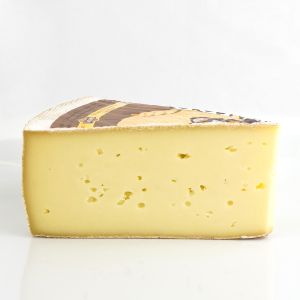 Saint-Nectaire is a pressed, uncooked cheese made from cow's milk, mainly of Holstein and Montbéliarde and sometimes Salers. It is circular in shape, around 21 cm in diameter and 5 cm in height, and weighing around 1.7 kg. A smaller version called Petit Saint-Nectaire is also made, measuring 13 cm in diameter, and weighing around 600 g. Both are made from either pasteurized or unpasteurized milk.

It is the first "farmer" AOC cheese in France with 6.000 tons produced each year.The finished cheese has a grey/brown rind, with white, yellow or red patches that surround a semi-hard pâte that is creamy in appearance with occasional residual holes. This dense cheese has a silky texture with soft acidity, and its taste is similar to that of Reblochon, with hints of hazelnut and mushrooms, due to the aromatic flora where the cheese ages.
Post your comment ...
sign in with ...