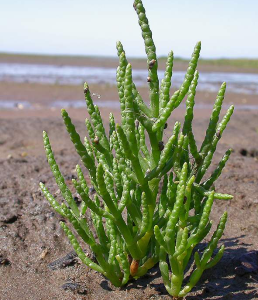 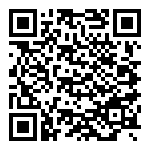 Salicornia species are native to North America, Europe, South Africa, and South Asia. Common names for the genus include glasswort, pickleweed, and marsh samphire; these common names are also used for some species not in Salicornia. The main European species is often eaten, called marsh samphire in Britain, and the main North American species is occasionally sold in grocery stores or appears on restaurant menus, usually as 'sea beans'.

Salicornia europaea is highly edible, either cooked or raw. In England, it is one of several plants known as samphire; the term samphire is believed to be a corruption of the French name, Saint-Pierre, which means "St. Peter's herb".


Samphire is usually cooked, either steamed or microwaved, and then coated in butter or olive oil. Due to its high salt content, it must be cooked without any salt added, in plenty of water. It has a hard, stringy core, and after cooking, the edible flesh is pulled off from the core. This flesh, after cooking, resembles seaweed in color, and the flavor and texture are like young spinach stems or asparagus. Samphire is often used as a suitably maritime accompaniment to fish or seafood.

Umari keerai is cooked and eaten or pickled. It is also used as fodder for cattle, sheep and goats. In Kalpitiya, Sri Lanka, it is used to feed donkeys.

On the east coast of Canada, the plant is known as "samphire greens" and is a local delicacy. In Southeast Alaska, it is known as "beach asparagus". In Nova Scotia, Canada, they are known as "crow's foot greens". In the United States, they are known as "sea beans" when used for culinary purposes. Other names include "sea green bean", "pousse-pierre", "passe-pierre", "pousse-pied", "sea pickle", and "marsh samphire"
Post your comment ...
sign in with ...