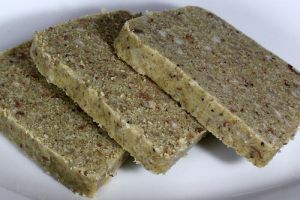 Scrapple is traditionally a mush of pork scraps and trimmings combined with cornmeal and wheat flour, often buckwheat flour, and spices. The mush is formed into a semi-solid congealed loaf, and slices of the scrapple are then pan-fried before serving. Scraps of meat left over from butchering, not used or sold elsewhere, were made into scrapple to avoid waste. Scrapple is best known as a rural American food of the Mid-Atlantic states. Scrapple and pon haus are commonly considered an ethnic food of the Pennsylvania Dutch, including the Mennonites and Amish. Scrapple is found in supermarkets throughout the region in both fresh and frozen refrigerated cases.

Scrapple is typically made of hog offal, such as the head, heart, liver, and other trimmings, which are boiled with any bones attached, to make a broth. Once cooked, bones and fat are discarded, the meat is reserved, and (dry) cornmeal is boiled in the broth to make a mush. The meat, finely minced, is returned to the pot and seasonings, typically sage, thyme, savory, black pepper, and others are added. The mush is formed into loaves and allowed to cool thoroughly until set. The proportions and seasoning are very much a matter of the region and the cook's taste.

Scrapple is typically cut into quarter-inch to three-quarter-inch slices and pan-fried until brown to form a crust. It is sometimes first coated with flour. It may be fried in butter or oil and is sometimes deep-fried. Scrapple can also be broiled; this is a good cooking method for those who like their scrapple crisp.

Scrapple is usually eaten as a breakfast side dish. It can be served plain or with either sweet or savory condiments: apple butter, ketchup, jelly, maple syrup, honey, or mustard. The state of Maryland is particularly in favor of scrapple topped with grape jelly. In some regions, such as New England, scrapple is mixed with scrambled eggs and served with toast. In the Philadelphia area, scrapple is sometimes fried and then mashed with fried eggs, horseradish, and ketchup.
Post your comment ...
sign in with ...
missing class include : daIp