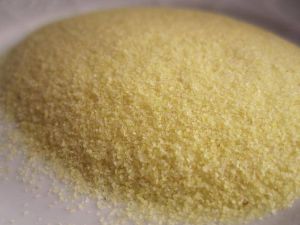 Semolina is the coarse, purified wheat middlings of durum wheat used in making pasta, breakfast cereals, puddings, and couscous. The term semolina is also used to designate coarse middlings from other varieties of wheat, and from other grains such as rice and maize.

Modern milling of wheat into flour is a process that employs grooved steel rollers. The rollers are adjusted so that the space between them is slightly narrower than the width of the wheat kernels. As the wheat is fed into the mill, the rollers flake off the bran and germ while the starch (or endosperm) is cracked into coarse pieces in the process. Through sifting, these endosperm particles, the semolina, are separated from the bran. The semolina is then ground into flour. This greatly simplifies the process of separating the endosperm from the bran and germ, as well as making it possible to separate the endosperm into different grades because the inner part of the endosperm tends to break down into smaller pieces than the outer part. Different grades of flour can thus be produced.

Types
Semolina made from durum wheat is yellow in color. Semolina is often used as the base for dried products such as couscous, which is made by mixing roughly 2 parts semolina with 1 part durum flour (finely ground semolina).
Broadly speaking, meal produced from grains other than wheat may also be referred to as semolina, e.g. rice semolina, or corn semolina (more commonly known as grits in the U.S.)
When semolina comes from softer types of wheats, it is white in color. In this case, the correct name is flour, not semolina. In the United States, coarser meal coming from softer types of wheats is known also as farina.
Culinary Uses
1. Semolina is used to make tasty upma, rava idli, khichdi, and desserts like halwa and kheer.
2. Sautee traditional seasonings, green chillies, ginger, onions and tomatoes, add some rava and required water, cook till the mixture leaves the sides of the kadai, and voila, upma is ready for breakfast.
3. Cook ghee-roasted semolina with a little milk and water, desired amount of sugar and pureed fruits, to make a tasty fruit halwa.
4. Add a little semolina to puri dough to make the puri stay puffed for longer.
5. Semolina can be used as an alternative to corn meal to dust the underside of fresh pizza dough to prevent it from sticking to the pan.
6. In bread making, a small proportion of semolina added to the usual mix of flour produces a tasty crust.
7. Semolina is traditionally associated with baked milk puddings too.
8 Semolina is popular in North Western Europe and North America as a dessert, boiled with milk, and sweetened. It is often flavoured with vanilla and served with jam.
9. Italians use semolina ground from hard durum wheat in the manufacture of gnocchi, and pasta (when it's sprinkled on to prevent sticking).
10. It is also employed to make couscous, soups and dumplings and can be substituted for some of the regular flour in cakes and biscuits to give a crisp, crunchy texture - especially scrumptious with shortbread.
11. Semolina is commonly used in the manufacturing of pasta and gives the pasta its pleasant taste and texture, but can also be used quite effectively to thicken stews, as a base for soufflé, as a hot cereal or as a cooked meal on its own. Cooked and dried, it is used to make couscous, which is cooked like rice.
Savory:

Boiled semolina turns into a porridge, known in some areas as Cream of Wheat. In Germany, Austria, Hungary, Bosnia, Bulgaria, Serbia, Slovenia, Romania and Croatia, semolina is known as Grieß and is mixed with egg to make Grießknödel which can be added to soup. The particles are fairly coarse, between 0.25 and 0.75 millimeters in diameter.

In South India, semolina is used to make savory foods, like rava dosa and upma, Kichdi or puddings, like kesari or sheera. It is sometimes also used to coat slices of fish, before it is pan-fried in oil, which gives it a crispy coating.

In much of North Africa, durum semolina is made into the staple couscous. Semolina is a common food in West Africa especially among Nigerians. It is eaten as either lunch or dinner with stew or soup. It is prepared just like eba or fufu with water and boiled for 5 to 10 minutes.

1. Semolina is made from durum wheat, so it is digested slowly. This helps you feel full longer and prevents you from overeating.

2. Semolina improves kidney function, thanks to its potassium content.

3. Add some chopped nuts and raisins to your semolina porridge, and you increase its nutritional content as well as taste.

4. Add some chopped vegetables to savory semolina upma, and you have a power-packed, as well as delicious, meal in a bowl.

5. Semolina is a good source of two vital vitamins: E and the B group. Both, as we know, are essential for good immunity from disease.

6. For those who lead an active lifestyle, semolina is a quick and nourishing source of energy.

7. The trace minerals in semolina, such as phosphorus, zinc and magnesium, are beneficial for the health of your bones and nervous system.